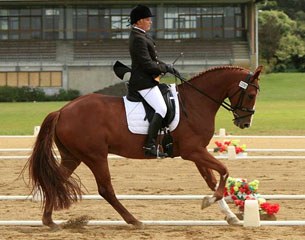 Don Qudos, Astek Ghisella, and Tama Park Bogart became the grand champions at the 2012 New Zealand Young Horse Championships held at the Nationals at Manfield Park Equestrian centre in Fielding, New Zealand, on 2 - 4 March 2012. The competition partly moved into the indoor arena after a "weather bomb" hit the show grounds on the weekend and temporarily flooded the outdoor schools.

Guest rider Jeremy Steinberg, the U.S. Young Riders Team Trainer, and the judges have put their expertise together to decide the winners of the class sections at the Nationals. The top two horses from the qualifying classes were allowed to compete in the final.

In the 4-year old division Karen Anderson's Don Qudos (by Don Quattro x Corlando) reigned supreme. Anderson, who is based in Whakatane, rode the inexperienced chestnut gelding to a 70.435% qualification score and the gelding won the finals. He outclasses James Jackson's Kinnordy Gasparo (by Gymnastic Star x Winterkoenig).

"Im very very pleased with my wee Don Qudos," Anderson told Eurodressage. "He was awesome and icing on the cake was that we won the 4-year old Young Dressage Horse title. Up until a month ago he hadn't even had a competition start & he took it all in his stride. The show was great, really well run even when the weather tried to put a dampner on proceedings the organizing committe did a super job making sure all horses were safe and re-scheduling our competitions." 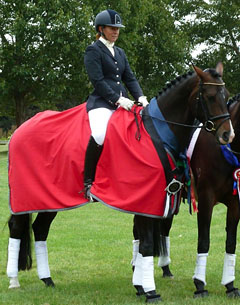 In the 5-year old division Janelle Sangster-Ward's Astek Ghisella (by Gym Bello x Aachen) surfaced at the top after finishing second in the qualifier with a score of 67.78%. In the finals the mare beat James Jackson's Kinnordy De Vito (by Danzante x Daktylus), which won the qualifier with 69.012%.

The Rotorua based Otillie Upshall went home with the National title in the 6-year old category with Tama Park Bogart (by  MJK Grand Salute x Contact x Northern Congress). The pair edged out the winners of the qualifier, Julie Fraser and the NZ Hanoverian bred Geisha MH (by Gymnastik Star x Graf Landau - qual. score 63.07%) in which they had earned 62.456%.

Tama Park Bogart is bred by Otillie's mom Geraldine Kawabe, who imported him as a foal along with his dam. "He was very consistent throughout the show, placing in all his classes," Upshall told Eurodressage. "I was very pleased with him, as we have only been to one big show in the last 12 months, and he hadn't worked indoors since August. I was especially pleased with his work ethic and attitude for the guest rider."