Jessica Michel Turns Up the Heat at the 2012 CDI Vidauban 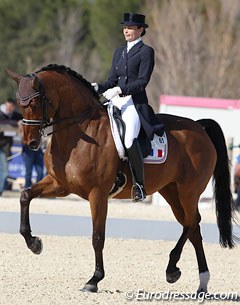 Trained by Hans-Henrich Meyer zu Strohen, the 29-year old Michel and her mare showed much power and bounce in the extended trot and passage work in their Grand Prix. The highlights of the test were the one tempi's, canter pirouettes (amazing lift in the forehand) and wonderful passage. The piaffe, which used to be the weak point of this talented horse, showed dramatic improvement. The first piaffe was good, there was a slight loss of impulsion in the second and in the third the mare struggled with the transition making too big a step into the final piaffe at X. The zig zag was well ridden, but the changes in it could have been more forward.

Jessica continued on a high winning the Grand Prix Kur to Music on Wednesday evening with 74.800%. Riding to music of Jean Michel Jarre, composed by Markus Hinzke, Michel made no major mistakes but the pair looked slightly tired at the end of a string of five competitions.

"Riwera is an incredible mare," Michel told Eurodressage. "She truly is a winner who is totally unphased. But she is a mare, which you have to take in the right direction. You can't force her to do thing; she just has to find her own flavour. We have linked five shows and I'm stupified by the freshness and eagerness to go she has maintained all the way to the end. She knew as if it was all or nothing." 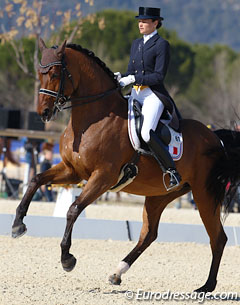 The relatively inexperienced Michel has faced much adversity in France the past five years being called too young, novice or underqualified to ride the top horses and stallions of the brand-new, high profile stud farm Haras de Hus owned by mogul Xavier Marie. Michel has shown relentless commitment to the sport and maintained a tunnel focus on her goal, the 2012 Olympic Games, which she has now accomplished with the unwavering support of her sponsor. Michel ranks 38th on the FEI Olympic Riders Ranking which was published on 2 March 2012 and earned an individual spot for France at the 2012 Olympics.

Belgian Vicky Smits-Vanderhasselt is trying hard to find her stride again at competitions after having given birth to her first son in 2011 and dealing with some minor injuries which sidelined her horse. Her sensitive bay Hanoverian mare Daianira van de Helle (by Dream of Glory x Ritual) was trailered to Vidauban for a last minute attempt to improve Smits' FEI rider's ranking as well as to make her seasonal outdoor show debut. 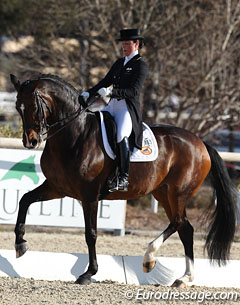 In the Grand Prix the pair was the penultimate to go and looked fresh and ready. Smits-Vanderhasselt is renowned for the incredible lightness in her contact and she rides the entire Grand Prix test almost without touching the bit. This creates remarkable results in the elevated, rhythmical and regular passage, but is an issue in the normal trot work which lacks connection between the hindquarters and forehand and swing in the back. The first piaffe was slightly small but it improved throughout the test. The one tempi's could have been more uphill but the two's were ground covering. Smits was certainly challenging Michel's winning score had she not made a mistake on the centerline in between the pirouettes. The pirouettes were always a problem area for the pair but they showed considerable improvement compared to a year ago. The mare made an unscripted flying change which added tension before the right pirouette. The eye-catching duo scored 69.851% to finish second.

The Belgian combination lost their high position on the leader board in the Kur to Music. They dropped to a 5th place with 70.175% in the freestyle. Their music was lovely but could be slightly more synchronous with the horse's gaits. The originally composed piano piece is very similar to Imke Schellekens' kur and matches Daianira well, highlighting the mare's light-footed movements. The horse became slightly hot in the middle of the test and made mistakes in the two tempi's. This stressed the rider as she began to struggle to get herself back into a relaxed state of mind and prepare for the pirouettes. The piaffe and passage in the freestyle were even better in the Kur than in the Grand Prix. 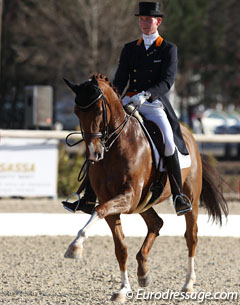 Dutch Diederik van Silfhout and his family (father Alex and girlfriend Lotte Jansen) traveled to South France with six horses for the last week of competition in Vidauban. For the big tour Diederik saddled the Dutch warmblood gelding Popeye (by Havel x Dillenburg) and finished third in the Grand Prix (69.617%) and Freestyle (72.825%). The liver chestnut gelding has a lovely passage but could sit more in piaffe, even though he stays rhythmical. The extended trot was rushed with no real lengthening in the frame, but the last of the three extensions was the certainly the best. The zig zag was wonderful. Unfortunately Van Silfhout's horse wws constantly behind the vertical. Popeye never has the poll as highest point and should have his nose more out so that he can stretch in the frame over the back instead of being a flashy leg mover. 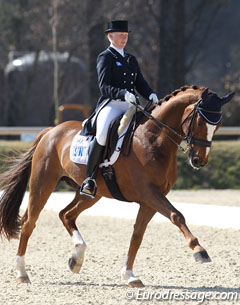 Finnish Emma Kanerva has her liver chestnut Hanoverian Sini Spirit (by Espri x Garibaldi II) finally on track. After rears and refusals at the 2011 European Championships the duo got stuck on a bumpy road with tongue issues and elimination for bleeding at the 2012 CDI Drachten. The pair travelled to the Sunshine tour, CDI Vilamoura and the CDI Vidauban were they found their stride again. In the Grand Prix Kanerva started out with strong trot half passes and much suspension in the passage. The piaffe lacks lift in the shoulder. The contact stayed nice and light throughout the test and if it weren't for a mistake in the one tempi's, the score would have been higher than 69.447% which placed them fourth. In the Kur to Music the pair climbed the ladder and became the runner-up with 72.925%. 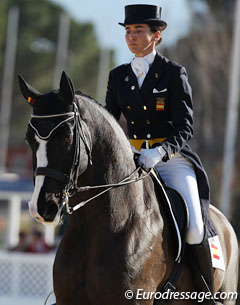 Spanish Beatriz Ferrer-Salat still hasn't made her long-anticipated come back with her star horse Delgado, but the Barcelona based rider brought her routinier Faberge (by Falkland) to France. The black Hanoverian is rock solid in his routine and though the piaffe is still not his highlight it showed improvement. Faberge is consistent and only the tempi changes could have been more meticulously executed. Ferrer-Salat finished fifth in the Grand Prix with  69.000% and they were fourth in the freestyle earning 71.050% for their ride to custom made Cees Slings' composed music.