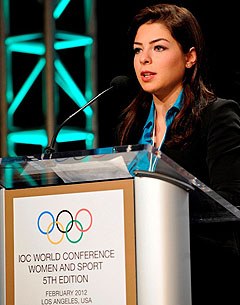 Dalma Rushdi Malhas, who made history by becoming the first Saudi female athlete to compete on the Olympic stage when she rode at the inaugural Youth Olympic Games in 2010, was amongst a high-profile group of speakers who addressed the recent IOC Women and Sport conference

in Los Angeles (USA). The 20-year-old, who won individual bronze in Singapore, spoke of her hope of gender equality in all sports.

“I cannot yet compare myself to the riders of the Saudi First Team, but I am determined to give my best to reach their level one day, and prove that all women athletes, all over the world, should be given equal opportunities”, she said.

Twenty-four hours earlier, Malhas had received the loudest applause of the day after being invited onto the stage by IOC Executive Board member Nawal El Moutawakel of Morocco. Malhas, and then her mother, were brought on stage to demonstrate that female athletes from the Middle East can make their mark on the international sporting arena.

In her speech, Malhas credited her mother as an inspirational figure in her sporting career. “I inherited my passion for show jumping from my mother, who has been a very influential character in my and many other Arab women's lives.”

“After cutting every corner and fighting hard for that individual bronze medal, I gained the strength to fight for all Saudi and Arab women. Those brief yet enduring moments on the podium gave me the drive and motivation to work until I reach the pinnacle of my sport. It will not take me hours, or days, or months, but years of training and sacrifice. However, time is irrelevant as my goal is clear.”

No Personal Invitations in Equestrian Sport at the Olympics

Media reports have claimed that Malhas may be invited to compete in the London 2012 Olympic Games, but while the FEI would welcome her participation as part of the Saudi team at Greenwich there are no personal invitations in equestrian sport at the Olympic Games.

"The FEI will not and cannot issue any 'invitations' for the London Olympic Games as has been reported in regard to female athletes from the Kingdom of Saudi Arabia,” FEI President HRH Princess Haya said.

“The Kingdom of Saudi Arabia has qualified a Jumping team for the 2012 Olympic Games so they will have the opportunity to send four riders to London. It is up to the Saudi National Olympic Committee to select which riders will be on that team, but all horses and riders must fulfil the eligibility requirements. This is the same for every nation sending riders to the Olympic Games.

“Our mission is to safeguard our Olympic product by delivering the very best of elite sport, and that depends on having the very best athletes that we have to offer competing at the Games. That quality of sport means that there is never any bending of rules.

“The FEI is in fact already very proud to have been the International Federation to field the first female athlete from the Kingdom of Saudi Arabia at the Youth Olympic Games in 2010, and we are enormously grateful to the IOC, the Saudi National Olympic Committee, and the Kingdom of Saudi Arabia for helping us write that chapter in the history books.

“We would of course be delighted if Dalma Rushdi Malhas were to compete in London, but she can only do that if she is selected to be part of the Saudi Jumping team. The FEI cannot issue a special invitation for an additional individual athlete."