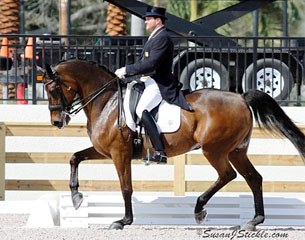 Ashley Holzer of Canada finished second on Breaking Dawn with 70.800% and Heather Blitz came in third on Paragon by a fraction of a percent less scoring 70.756%

Flettrich was thrilled with the peformance of the 16-year-old gelding and the score, it was their second highest in the Olympic Grand Prix Special.

"I am happy," said Flettrich. "I can take risks. Before the WEG we were still getting to know each other. Now, I'm willing to take a chance. I could not have done it before. He's become my horse now."

Flettrich owes the great score to a change in attitude. "Otto is arrogant and I used to feel I had to control him, but now I just encourage him to be arrogant."

This tactic is working as the pair now has the necessary scores in the Olympic Grand Prix Special to qualify for the US Olympic Selection Trials. 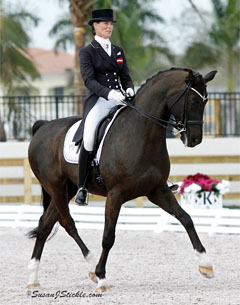 Katharina Stumpf of Austria won the final international class of the show at the Global Dressage Festival taking top honors in the FEI Intermediare Freestyle with a score of 68.500% riding For My Love. Maria Florencia Manfredi of Argentina finished second on her Argentine-bred palomino LM Chey-Chey scoring 64.950%. US rider Sasha Newman was third on Rossini 234 with a score of 56.925%.

Dressage competition continues at the Stadium on Tuesday with the Global Dressage Festival National 1, which takes place February 21 through Thursday, February 23.