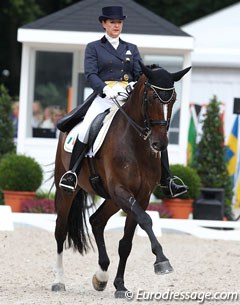 For a record-breaking eight time, Anna Merveldt is the winner of The Irish Field Dressage Rider of the Year Award. The Italian based Merveldt continues to be Ireland's number one Grand Prix rider with top performances at the biggest competitions in Europe.

The points gained in Austria saw her break into the top 50 in the FEI World Dressage rankings.  This is the key to Anna’s ambition to compete as an individual for Ireland at the London Olympics.  She is the only Irish rider to have reached an Olympic final when placing 11th with Rapallo at the games in Barcelona twenty years ago.

Unfortunately, Anna was injured when a car drove into her vehicle as she left her yard in Milan on November 17th 2011.  A broken rib below her left arm was diagnosed and on medical advice she had to stop riding to avoid the risk of puncturing a lung.  The Irish rider has since made a full recovery and will be back out competing with her 16 year-old Bavarian Warmblood gelding 'Coryolano' before the end of February.

The Irish Field Dressage Rider of the Year Award was first presented in 1997. The previous winners are as follows: