Relation Between Foals' Standing up Behaviour and Prevalence of Osteochondrosis 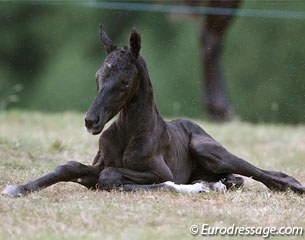 Researchers Meerburg, Van Dierendonck, Back, Van den Belt, Van Schaik, and Meeus of the Utrecht University has investigated that the relation between standing up behaviour of warmblood foals and the prevalence of osteochondrosis differs between farms.

Osteochondrosis (OC) is a common and clinically important joint disorder that is defined as a focal disturbance of enchondral ossification. The pathogenesis is multifactorial, but in most recent literature the failure of blood supply to the growing cartilage has been seen as a factor of major importance. Doubts about heritability of OC became clear when different joints appeared to be involved at different ages, so environmental factors are likely. Cartilage injury (with fragmentation) due to pressure changes when the leg slips, has been observed.

We tested the hypothesis that there is an association between the way of standing up in foals and the development of OC. We observed the standing up behavior of 36 warmblood foals at the age of 8 months at 5 different farms, with different housing / bedding. Foals were observed using surveillance tube cameras, and stored on VHS videotapes (3-4 hours/day; total 24 hrs per farm). We scored whether there was a normal stand up (NS) or a slipping limb (SL).