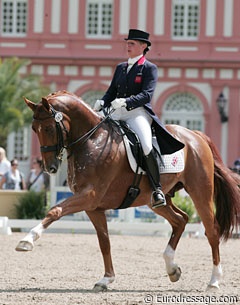 With the dropping out of Salinero and Totilas, the 2012 World Dressage Masters' star-studded cast got restricted to Ravel and Valegro, while ticket prices for show access remained sky high. The WDM organizers have put in an extra effort to convince Carl Hester to compete Uthopia there as well, but Hester decided to bring Fiona Bigwood's Wie Atlantico instead.

While Charlotte Dujardin will blaze the US trail with Carl Hester and Roly Luard's 10-year old phenomenon Valegro (by Negro x Gershwin), Carl will partner Penny and Fiona Bigwood's WEG team silver medallist gelding, Wie Atlantico. This will be Carl's first outing on the 13-year old Hanoverian gelding (by Wie Weltmeyer), which has only been in his stable for a week.

Wie Atlantico' owner Fiona, who is expecting her third child this spring,  said, "Carl offered to keep Atlantic ticking over for me until the baby is born, but if he can fit in one or two shows before that, then that’s even better.”

In the summer of 2011 Bigwood tried to sell Wie Atlantico by placing him at Patrik Kittel's yard in Germany. However, a sale did not take place and Fiona will ride and compete the chestnut gelding again after the birth of her baby.

Charlotte and Valegro are no strangers to the World Dressage Masters circuit having won the Grand Prix Special at Hickstead in July last year. This will however be the first time that Valegro has travelled by air, and also the first time Charlotte has been to America.

“It’s very exciting and will be good fun," Charlotte told British Dressage. "It felt a bit hairy going into Olympia as we hadn’t been out since the Europeans, but after experiencing that, I feel we’re ready for this. I want to try and hit 80% again, keep your fingers crossed for me!”