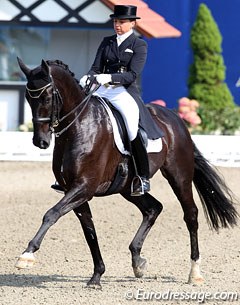 Owned by Sven Rothenberger and originally intended as Grand Prix horse for his young rider daughter Sanneke Rothenberger, Van The Man was trained and competed to Grand Prix level by Dorothee Schneider. The black gelding competed very successfully in the Tesch Inkasso Upcoming Grand Prix horse show circuit in Germany, achieving consistent seventy percentage marks and a  72.604% in the Grand Prix Special at the 2011 CDI Fritzens.

"Sanneke is very committed to whatever she does and always gives it 100%. This counts for her riding as well as her studies. She concluded that it's bit too much to ride four S-level horses every day combined with university studies, so we decided to sell Van The Man," said Rothenberger.

The Colombian born Cesar Parra competed for his native country at the 2004 Olympic Games and 2006 World Equestrian Games. He became a U.S. citizen in 2008 and was selected with Grandioso on the U.S. dressage team for the 2011 Pan American Games. Riding for the U.S.A for the first time at a major championship, Parra won team gold with a historic team high score. 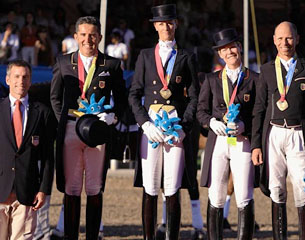 "I love my new horse, I was attracted to him from the very first second I was close to him," Parra told Eurodressage. "The Man is really a fun horse; fun to ride, confident in his work and lots to improve as he matures. He has been ridden correctly and that made my first ride very easy to make an immediate partnership with him."

The New Jersey and Florida based Parra has set his sights on the 2012 Olympic Games in London and wants to vy for a U.S. team spot with Van The Man.

"I am looking forward to represent my country again with this wonderful horse," said Parra. "I am really blessed to have people like Sarah and Michael (Davis) in our team."