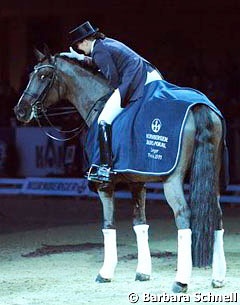 Carola Koppelmann and Ralf Hartmann's 8-year old Oldenburg gelding Desperado OLD (by Dressage Royal x Rouletto) won the 2011 Nurnberger Burgpokal Finals at the 2011 CDI-W Frankfurt in Germany on Saturday 17 December 2011. The combination won the warm up round as well as the finals with massive seventy percentage scores.

The Warendorf based Koppelmann has only been riding Desperado OLD for little over a year. The compact black gelding was discovered as a youngster by Nadine Plaster and Simon Kohlenbrenner at the Vechta Elite Auction. Plaster won the 2008 World Young Horse Championships in Verden with the gelding and in 2010 Desperado OLD sold to Ralf Hartmann, the owner of the innovative but failed company CP Medien AG, which used to sponsor the Young Horse Grand Prix show circuit in Germany. His new owner put the horse in training with Koppelmann.

The now 8-year old Desperado had a great season at Prix St Georges level and made his mark at the Nurnberger Burgpokal Finals. He won the warm-up round with 72.650 % and dominated the Prix St Georges special Finals class with 75.450%. The 33-year old Koppelmann proved her worth as a trainer as this is the second time she has won the Burgpokal Finals. In 2006 she won with Comic Hilltop FRH.

Routinier Isabell Werth became the runner up with Flatley, a Rhinelander by Furst Piccolo x Ehrensold. The 7-year old stallion is Werth's seventh horse  she has qualified for the Burgpokal Finals and won three so far. Werth and Flatley, whom she discovered as a foal and co-owns, scored 73.450% in the Finals.  The stallion is originally trained and competed by Werth's assistant trainer Matthias Bouten and after the Finals he will return to his capable hands. 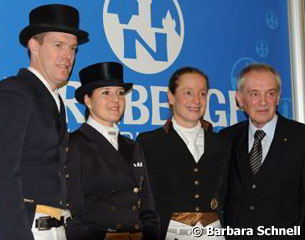 Oliver Oelrich and Mr. Holkenbrink's Westfalian licensed stallion Rock Forever (by Rockwell x Landstreicher) were third with a 73.000% score. The impressive dark bay horse was a handful in the warm up round as the stallion was spooky in the electric indoor arena in Frankfurt, but in the finals this busy breeding stallion (which covered approximately 300 mares in 2011) stood out with his elasticism and climbed the ladder to a third slot.

The Nurnberger Burgpokal was established in 1992 and celebrated its 20th edition this year. Dr. Reiner Klimke was the originator of the show circuit, of which the winners include several internationally super successful Grand Prix horses (Augustin OLD, Elvis VA, El Santo, Bonaparte, Chacomo).