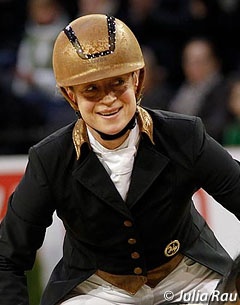 The 2011 CDI-W Frankfurt kicked off today with the warm up round for the Nurnberger Burgpokal Finals, a national show circuit finals for small tour horses. Isabell Werth is competing Flatley in the Finals but more interestingly, she made a public statement by wearing a helmet at an FEI level competition.

The German helmet company Uvex has sponsored Werth and the multiple gold medal winning rider flashed her new golden helmet and matching tailcoat with golden lining in Frankfurt, making a style and safety statement to the public.

“As an athlete in the public eye and with my responsibility as a mother and as an employer, I see accident prevention as one of my obligations," Werth explained in a press statement. "In dressage, in particular, helmet wearing is still almost a taboo, even on the competition circuit, and there is a clear need for action."   The dressage arena can be dangerous as American Olympian Courtney King-Dye’s sustained severe head trauma following a heavy fall in 2010.

According to statistics from Germany’s Federal Insitute for Occupational Safety (BAuA), 30,000 accidents happen in equestian sports in Germany each year. 85% are women, with young riders most at risk. In fact, girls under 14 make up 40% of all accidents. Horse riding is ranked fourth in a list of most accident-prone sports, after football, hand-, volley- and basketball, and inline skating.

The European Home and Leisure Accidents Surveillance System (EHLASS) also collects data on equestrian accidents and has identified which parts of the body are most affected. 10% of riding accidents result in head injuries, 50% of these include bruising or contusions of the brain, approx. 20% also suffer fractures to the skull, while 10% have contusions and bruising to the skull.

Isabell Werth has chosen uvex as her helmet supplier and she signed a long-term contract with the protection specialists based in Fürth, Germany. “The high safety and protection standards, comfort, and optimal ventilation of their helmets, as well as their range of classic, elegant designs suitable for dressage, have completely won me over.”