The PRE Improves, but Time Stands Still at 2011 SICAB 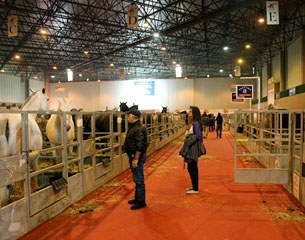 From November 22-27, Sevilla was yet again the host city for its national celebration of the Horse of Spain, and meeting place for all who love this breed. The event is known as SICAB (Salon Internacional del Caballo), and draws a few hundreds of thousands of people every year for its various breed and sport championships, all involving one horse breed, the Pura Raza Espanola, or the PRE Horse.

The event fills more than five pavilions with stabling, shopping, restaurants, exhibition arenas and hospitality stands, and there is no better place to be introduced to the culture of the south of Spain and the horse it has produced.

When I was asked to do the article again this year, I was a bit stumped. All that I could say about this year’s event has already been said in my article of a year ago, or the one before that…. I have already reflected on the year-after-year similarity in the format and production of SICAB, and the Andalusian resistance to change. The competitions and characters, as well as the sights, sounds, and flavors of SICAB are exactly the same every year. Those of us who go religiously year after year have come to expect this, if not prefer it in a way.

SICAB is the horse show where time stands still. The riding tradition in Spain is a rich legacy and you need only a few minutes on the grounds to see men and women carrying on this heritage on young fresh mounts, but in nineteenth-century riding costumes with what appears to be the same style tack as two centuries ago. The modern riding sports—ie, dressage—are widely followed by the Andalusians, but no more so than the older ones such as Doma Vaquera and Alta Escuela.

The breed classes present the highest quality specimens of the race, some with exceptional movement. Every year at SICAB, and probably in every horse breed show, there is a higher percentage of good horses in the lower age levels. Those taper off as you move up the age groups for the obvious reasons—good horses often get sold or move on to other uses. The top three however will usually come back the following year, which makes the Grand Champion contest always worth watching. 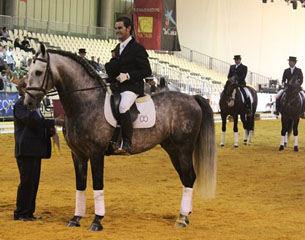 From the perspective of a dressage enthusiast, SICAB can be frustrating until you remember that SICAB does not promise to be something it is not. Functionality tests are not real dressage tests and are not ridden to correct directives—they are tests to show the range of a horse’s movement and are often over-ridden for that reason. The Copas for Doma Clasica (Dressage Cups) are held at the 4,5,6, Prix St George and Grand Prix levels with good prize money, and participants qualify at designated national dressage competitions throughout the year. Nevertheless, SICAB is not a rated show, and so does not always draw the most competitive pairs.

In recent years, Grand Prix has been criticized for not fielding the top PRE combinations, but this is the result of progress. There was a time I can remember when the only place for upper level PREs to be judged against each other by somewhat sympathetic eyes was at the Grand Prix at SICAB. Often young PREs getting ready to do the Grand Prix would hope to receive a good score or a win at SICAB before going against warmbloods from Northern Europe at the international levels at, say, Sunshine Tour in the spring. But times have changed for the PRE horse in competition—thanks to the success of the Spanish National Team and individual horses. PRE horses are better understood by the international dressage community, and generally judges in Europe no longer show any discrimination against this breed. As the top horses become more competitive and valuable, fewer riders or owners want to take the risk of an exhibition Grand Prix.

This year’s Grand Prix class was particularly disappointing to me because I had seen many of these horses and riders at national competitions over the summer, and they all performed better than they did at SICAB this year. The environment has to be the most challenging of any for a Grand Prix horse, with a chaotic warm-up, a dark and visually noisy arena, and all sorts of sounds and scents coming from the stock next door that has been gathered from hundreds of pastures. I applaud the efforts of the riders who present these horses—often for sale or for the pleasure of their owners who want the honor of showing a horse at SICAB. But I ask that observers be not too critical of the quality of Grand Prix without taking the circumstances into account. 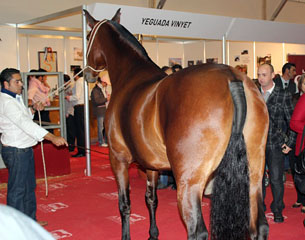 But while time stands still at SICAB, it is not standing still for the PRE Horse in dressage, neither in Spain nor the world. The breeding, training and competing of these horses continues to improve as does, maybe even more importantly, the reception of a good Spanish horse in the top show rings of the world. Evolution starts from the ground up:

--PRE Breeders are now specializing in horses for dressage. I had the pleasure of visiting Maria Jose Ruiz Fernandez at her Yeguada Susaeta, for example, who is developing a sophisticated line of impressive moving horses from dressage performance progenitors.

--The Spanish National Championships for Young Horses had a record number of finalists—56 in the 4 Year Olds, and 37 in 5 Years Old, and 26 in 6 Years Old—with generally 50% of qualifying horses being PREs. This is only the third year of Young Horse Championships and horses qualify with scores and standings throughout the year.

--Over the past few years, Spain has added a number of CDIs and additional international circuits, so that the opportunities for riders of PREs to be evaluated by top judges has increased dramatically in a short period of time. In international competitions throughout Spain and Europe, PREs used to fill the bottom portions of the Grand Prix classes, but now often are occupying the upper third, with some placing in the top rankings. 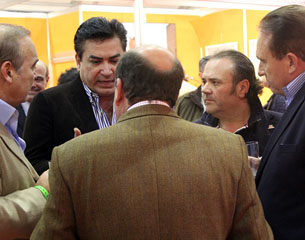 --In France this year, the National Champion of Dressage was a PRE, Helio II, ridden by Arnaud Serre.

For so many of us, it all started with SICAB. There would be other news to report about the politics of the PRE horse, the market and international studbook issues, but, like others who make this trip, I prefer to look back with a certain sentimentality on SICAB and all that it offers. It is still the place where passion is part of horsemanship, where we allow the Andalusian culture to romance us, and we are every year newly impressed with the seductiveness of man on horseback.