Dressage at Devon Commits to New Footing in Warm Up Arena 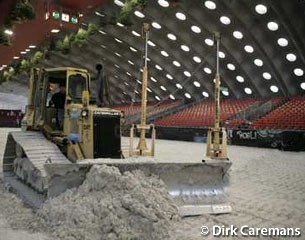 Dressage at Devon has announced that it has committed to putting new footing in the warm up arena so that the competition can continue to be the premier dressage show it has been for almost four decades, attracting riders and their horses from around the world.

This year, Dressage at Devon, in conjunction with the Devon Horse Show, is embarking on a joint effort to raise the funds necessary to excavate, improve the drainage, and replace the existing footing in the warm-up arena with the same euro-felt about which competitors around the world have raved.

The improvements made at Devon will take this historic facility one step closer to being an international-caliber facility, attracting competitors of the highest quality from all over the USA and other countries.

“Dressage at Devon has always been a wonderful event, with excellent facilities and strict security that makes the rider experience a great one.  Their dedication to improving the facility is obvious at every show.  This campaign will be critical for the future of Dressage at Devon and I, for one, want to help make it happen,” said U.S. A-team rider Catherine Haddad–Staller. Haddad was the 2010 Grand Prix Freestyle Winner at Dressage at Devon.

“Our goal is to install the same excellent, all-weather footing in the warm-up ring for the 2012 Dressage at Devon and Dressage at Devon has committed to giving the first $25,000 of the estimated $300,000 it will take to bring this vision to life. We’re asking our supporters, exhibitors, spectators and sponsors to show your support by giving what you can to the effort. All contributions are tax deductible and go directly into the ‘footing fund’ which can only be used for the warm-up footing,” said Lori Kaminski, President and CEO of Dressage at Devon.

Time is of the essence. In order for the footing to be in place for the 2012 show season, excavation will need to be started in late winter.