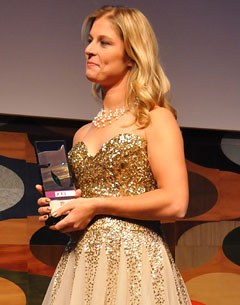 No equestrian personalities have been nominated to contest for title of Sport Figure of the Year at the annual Dutch NOC-NSF Sport Gala, where the most successful Dutch athletes, teams and trainers of the year are celebrated during a special gala evening show.

Unfortunately, none of them have been picked up by the NOC-NSF selection committee, which consists of some of the best former Dutch athletes across various disciplines as well as an expert panel (e.g. Pieter van den Hoogenband, Leontien Zijlaard-van Moorsel, Joop Alberda, Ewoud van Winsen, and Jeroen Bijl).

Though the equestrian sport is one of the few disciplines in The Netherlands which guarantees medals at major international championships, the equestrian athletes are surprisingly ignored at the NOC-NSF Sport Gala. In 2010 Edward Gal was probably the most successful Dutch athlete of all disciplines but he also got snubbed at the Sport Gala. Anky van Grunsven won the Athlete's title only once in 1994.