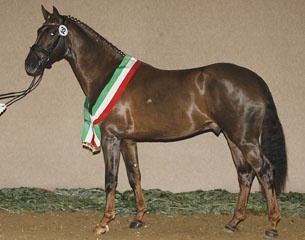 Dubrovnik NRW, a Diamond Hit x Regazzoni x Matador x Donnerhall son, was named champion of the 2011 Westfalian Stallion Licensing in Munster-Handorf on Wednesday 23 November 2011. The liver chestnut stallion is bred by Piet Crum, and owned by Eugene Reesink from The Netherlands. He sold at auction for 100,000 euro to Sissy Max-Theurer from Austria.

Dubrovrik has a very quick and active hind leg, a slightly sunken back, and much shoulder freedom. Even though this colt is born in July, he appeared quite mature for his age. He could have a bit more stretch in the frontleg but overall he presented himself well with excellent self carriage on all three days of the licensing.

Forty-five dressage and show jumping colts in total were licensed in Munster-Handorf this year. Eight dressage stallions made it to the premium ring. Twenty-four licensed stallions were offered for sale in the auction.

The reserve champion is the dark bay Rhinelander branded Dominos (by Don Massimo x Sir Schölling x Festivo), bred by ZG Pleines and owned by August Frerick. This stallion was praised for his canter on the lunge line and in freedom he showed good knee action and elasticity, but the colt received very little response from the crowds and sold for only 58,000 euro to the Moritzburg State Stud 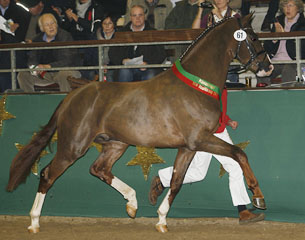 The third placed premium stallion Quotenkonig (by Quaterback x Furst Piccolo x Sandro Hit) was the crowd favourite. Bred by Frank Dahlhoff and owned by Karin Dust, this stallion excelled on hard surface and in freedom, but was difficult on the lunge line. He was presented at auction and sold for the highest price, but was in fact bought back by Dust for 170,000 euro. 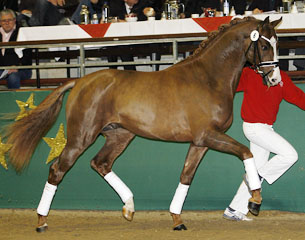