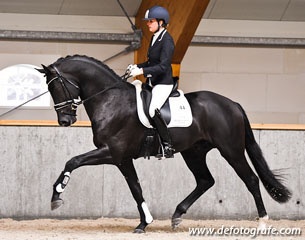 The 2011 KWPN Autumn Stallion Performance Testing concluded today in Stegeren, The Netherlands, and five young dressage colts have been approved for breeding for the KWPN society. Desperado (by Vivaldi x Havidoff) became the highest scoring stallion of the lot.

Desperado is bred by the Andeweg family and owned by the breeders in partnership with Ad Valk. He initially stood at stud in Germany but was brought back home to The Netherlands when the colt sustained a thrombosis from an injection. It was then decided for him to do the KWPN testing. The colt is by Vivaldi out of Sarita (by Havidoff x Ferro), which is also the dam to full brother Chinook.  He scored 8.5 for trot and self carriage, 9s for walk, suppleness, rideability and dressage potential and 9.5 for canter. His total mark of 89,5 put him well ahead of his peers and ahead of Don Tango, which won the 2011 Spring testing with 83,5 points.

The committee praised Desperado (previously named Desperados as well as Darkboy) for being an "honest and reliable stallion with a very good work ethic." They liked his willingness to work. The walk is "clear and "very good in ground cover," the trot is "uphill" with a "expressive front leg usage". The hindleg moves under well but "could carry more." The canter is "powerfull, uphill and very good in ground cover." At the time of the testing, Desperado had a hollow wall in his right front hoof which was filled by the farrier. The breeding recommendation is that "Desperado can give strength, movement technique and suppleness to dressage horse breeding." (complete report)

The second highest scoring stallion is Davino VOD (previously named Deniro VOD) which totalled 85.5 points. This colt is bred and owned by A.J. van Os, and is by Hotline out of a Michelangelo x Farn dam, which also produced the approved stallion UB40. He scored 8.5 for walk, trot, canter, suppleness, self carriage and dressage potential and 9 for rideability. 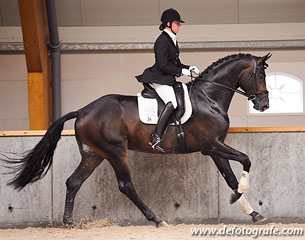 The committee praised the colt for his honest and reliable work ethic and excellent rideability. The gaits were pure, uphill and good in ground cover but he could gain more strength in trot. Davino VOD has "very much suppleness, a very good self carriage and balance." The stallion had impeccable behaviour in the stall and was easy to handle. The committee recommends him for mares to increase  "diverse blood" as well as to improve the "frame, conformation and rideability." (complete report)

The third best score was achieved by Dark President D&R (previously named Dream Theater) which scored 81.5 points. The colt is bred by J. Gordijn and owned by Carolyn de Roo's President Stables. He scored 7.5 for suppleness and rideability, 8 for walk and self carriage, and 8.5 for trot, canter, and dressage potential. (complete report)

The committee described the colt as an "honest and reliable stallion which is quickly distracted." He has decent willingness to work. The walk, trot and canter were described as "good" with "sufficient ground cover". In canter the stallion could have been "looser in the topline". He has a "good self carriage and balance." The colt is recommended to "improve self carriage and movement mechanism" and is recommended for "long lined mares." (complete report)

J.A. van Venrooy's bay Davinci (by Valdez x Voltaire x Eros) scored a total of 79 points with 7.5 for walk, trot, suppleness, and self carriage, 8 for ridebaility and dressage potential and 8 for canter. The committee liked his work ethic and good rideability. The walk was good, the trot could be more uphill, the canter was "very powerful and good in ground cover." Davinci is recommended to improve the canter and enlarge the frame for dressage horse breeding. The stallion preferably needs mares that move uphill. (complete report)

W.L. Plaizier's dark bay Dark Pleasure (by Ufo x Jazz x Ferro) finished on a total of 78 points. He scored 7.5 for walk, trot and self carriage, 8 for canter, suppleness and dressage potential and 8.5 for rideability. This colt has a "very good work ethic" and has "very good rideability". He is lightfooted in trot and canter and in all three basic gaids has "good ground cover". The colt is recommended to improve "character, rideability and lightfootedness." He would fit "large framed mares." (complete report)