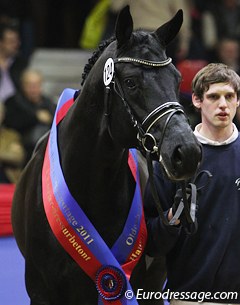 Bred by Heinrich Giesselmann and owned by Gestut Sprehe, Destano was presented in hand alongside the Oldenburg bred Surprice (by Sir Donnerhall I x Prince Thatch xx) and the Oldenburg licensing champion Fairbanks (by Flemmingh x Inschallah AA). The black stallion was unshaken by the electric atmosphere at the 2011 Oldenburg Stallion Licensing and showed impeccable behaviour. He also had the best walk of the three and moved with much engagement from behind.

Especially his first foal crop was a decisive factor in Destano winning the title. He sired two foals that sold at the elite auction and 28 foals earned a premium at the foal inspection. of the inspected at the foal shows.