Liostro in Training with Ingrid Klimke 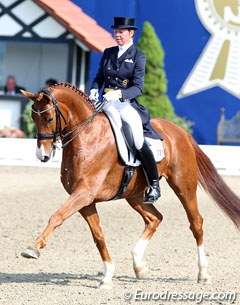 Ingrid Klimke has received a new Grand Prix horse in training which can boost her back in the big league of dressage. The Verden based Oplander family moved their chestnut Liostro away from Birgit Finken to Ingrid Klimke's stable in Munster, Germany.

The 9-year old Hanoverian Liostro (by Le Primeur x Wenzel I) was trained by the Luxembourgh Fernand Wetz until the autumn of 2010. Then Birgit Finken took over the ride and the gelding made his mark in the young horse Grand Prix class in Germany this show season. The refined looking horse scored well and
showed much promise for the future.

After Damon Hill NRW was relocated to Helen Langehanenberg's barn, Ingrid Klimke lost her Grand Prix horse. With Liostro she will have a new star in the barn.

"Liostro just came last Sunday and I am very excited about him," Klimke told Eurodressage. "He is really nice and fun to ride! I look forward getting to know him this winter and start him next year in Grand Prix level, perhaps the young Grand Prix horse classes because he will be 10 next year."

Kimke also has the black stallion Dresden Man (by Dresemann) in her barn which she competed at the World Young Horse Championships in Verden two years ago. Dresden Man made his small tour debut this year.

"He is doing very well learning the Grand Prix movements," Klimke added. "He has a lovely passage and is doing the one tempi now. I am very much looking forward to the future with these two special horses. I hope that both are developing well with gymnastics, cavaletti work and dressage."