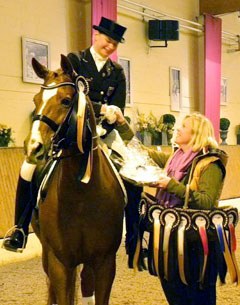 The first of the Ankum Dressage Club's four Autumn tournaments turned into a most successful weekend for Dressage trainer Andrea Timpe from Hattingen, and now the rider is doing it again: winning!  Timpe triumphed on the first challenging day of the fourth and last show weekend at the ADC Tournament in the Ankum Auction Centre with ten-year-old Hanoverian Dixieland.

Timpe was delighted to have kicked off the action so successfully, along with her colleagues, Stephan Köberle from Freiburg on Darjeeling and Bianca Kasselmann from Hagen a.T.W. With nine-year-old Wish Wonders – this trio took their places on the podium at the end of the first day of the tournament.

The first of three tournament days ended with the Intermediaire II for the young horses in full-size Dressage sport.  Before that the arena belonged to the very young horses and the amateurs.  In their M-class Dressage event, the first three places went to Russia, Germany and Greece. Anastasia Nikolaeva, who trains with Christoph Koschel and has already qualified for the Juniors and Young Riders European Championship, won the event with 15 year-old Royal Flash, ahead of Mandy-Julia Mansmann (Olfen) with Edward Louis B and Greek youth rider Angela Sklavounos with Quanderas.  Sklavounos is preparing herself at Hof Kasselmann for the Young Riders' Dressage World Cup final in Frankfurt.

The very youngest four-legged Dressage candidates are just five and six years old, and for them the ADC Tournament is a good station on the way into the sport.  After all, they must learn how to cope with a tournament performance, and all its distractions.  Six year-old chestnut Oldenburg Don Bettino, with Belgian Julien Despontin in the saddle, clearly felt most at home.  Don Bettino triumphed in their M-class Dressage Horse Event with a score of 8.9.  Hanoverian Louboutin, just a year younger, won the L-class Dressage Horse Event with Heike Hamel in the saddle and a score of 8.2.

Weltclassiker is 15 years old, and the dark brown son of Welt Hit-II has an excellent dressage rider in the saddle in the form of Bianca Kasselmann.  The gelding has at least some test experience under his belt and he knows what is important in the sport.  That is just one of many reasons why Weltclassiker won the Short Grand Prix at the Ankum Dressage Tournament with Bianca Kasselmann and a score of 71.70 percent.  Darjeeling is just ten years old, has significantly less experience but a great deal of talent, and in Stephan Köberle from Freiburg he has a good trainer as his 'pilot'.  Darjeeling promptly won the Young Horse Grand Prix with 69.50 percent.  These two tests were, without a doubt, the most demanding on this second day of the ADC Tournament in the Ankum Auction Centre.

In the S-class Dressage test for amateurs, Greek rider Angela Sklavounos with Quanderas now claimed victory, ahead of Mandy-Julia Mansmann (Olfen) on Edward Louis B and Natascha van Dyk (Berlin) with Savignon, having achieved second place in the opening.  For Sklavounos the Ankum Dressage Tournament, now in its last weekend, is one of the last good opportunities to prepare herself, under tournament conditions, for the Young Riders' World Cup final in Frankfurt. Each day of competition practice is worth double there.
Sunday, with the Grand Prix de Dressage, marks a temporary conclusion to the ADC Tournament weekends.  Only for a few weeks though, as the ADC Tournaments will begin again in January 2012.  Coming up is the P.S.I. Auction in Ankum on 10th and 11th December..