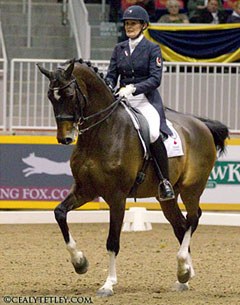 "I'm extremely happy with his Grand Prix performance - he went in and did his best - I know he couldn't have been any better. And he almost seemed to like the people clapping for him! I was pleasantly surprised and happy for him. He's amazing - every time I get on him I'm so pleased. I'm very lucky to get to ride him. I'm thrilled.

"I was more than a little nervous about coming to the Royal with a new horse - I don't think he has ever been at a show quite like the Royal. It's quite the experience, withClydesdales and hitches and road horses and jumpers... it can be overwhelming. But he's handled it very well so far."

In preparation of this event, Holzer tried to get "Edward" used to more music and the electric atmosphere typical for The Royal. "We turned the music on in the arena for the first time a few weeks ago, and he got VERY tense - so my brother came and installed a sound system in my arena in New York! "Edward" has been listening to music at a very loud level for the past two weeks."

Holzer changed the horse's name to Breaking Dawn because her husband is a partner in the production company for the Twilight movies, hence "Edward". PJ's other horse in the barn is "Bella", aka "New Moon".

Winter and Proton are the Runners Up

In fifth place, with a score of 64.468%, was Evi Strasser of Ste Adele, QC and her 11-year-old Oldenburg gelding Action Tyme, sired by Aktuell.

The Royal Horse Show is part of the Royal Agricultural Winter Fair, which runs for ten days every November. It is considered the wrap-up event of the season for the competing disciplines. The CDI3* was presented by Dominion Regalia, a supplier of ribbons to the Royal since the Fair’s inception in 1922.

Dressage competition at the Royal continues tomorrow, Thursday, November 10 during the evening show with the Grand Prix Freestyle.