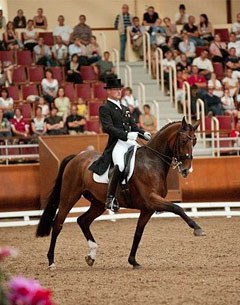 The bay gelding (by Briar) was owned by Dahl's fiancee, British WEG team rider Fiona Bigwood. Anders trained the bay to Grand Prix level and competed him successfully at international GP level since 2009. Unfortunately, the Danish Equestrian Federation never selected him on their championship team, which left the rider very disappointed.

"Some decisions are very hard to make and Anders loved this horse more than any, but getting on the Team was proving very difficult so we made the heartbreaking decision to sell," Bigwood explained.

Bukowski, nicknamed Bam Bam, will continue his career under the 22-year old Dong-Seon Kim, who lives in the States and trains with Korean Jung Kyun Suh, who rode at the 1988 Olympics aboard Reiner Klimke's Pascal.

Kim won team gold at the 2010 and 2006 Asian Games with Pleasure and Viktoria.