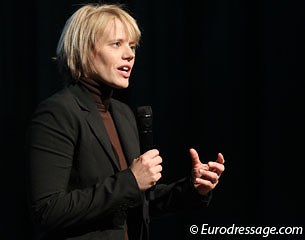 After a stormy morning session in which politics and animal welfare were placed in the balance, emotions were set aside for science in the break-out sessions. Sport psychologist Inga Wolframm, veterinarian Dr. Hilary Clayton and animal behaviourist Dr. Andrew McLean presented scientific research that contributes to more refined knowledge of the psychological processes behind judging, the bio-mechanics of a horse and equine behaviour.

In a sequal to her presentation of last year, the eloquent Dutch based German Inga Wolframm addressed in more detail the visual attention patterns in dressage judging. While judging was last year’s hot topic of the forum, the blood rule took centre stage this year. “I’m pleased I’m off the hook this year with the blood rule and the issue is not so much on judging,” Wolframm confessed at the start of the lecture.

Wolframm highlined that problems with judging arise because dressage is an aesthetic and highly complex sport where “much depends on getting it right.” Judges face a complex task in which they have to to perceive and appropriate the selection of visual stimuli and categorize and evaluate the information in a very short period of time. 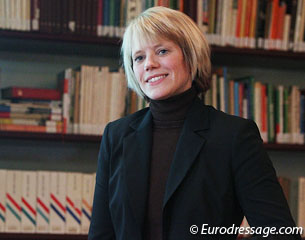 “Judges have very little time because the movements go quickly and the judges are under a lot of pressure to get it right,” Wolframm explained. From a sport psychologist point-of-view this means that not only riders but also judges experience competition anxiety and have to cope under pressure.

Wolframm referred to the Judges Handbook where you find a page-long description of how a movement is executed correctly. All the requirements are too much to check in a few seconds of time which means that judges make “visual short-cuts.” Inga explained that “skilled expert individuals have more efficient and approriate “visual search behaviours”. They scan and focus on the aspects within a performance that are the most relevant to the task ahead. They pay more attention to information-rich areas.”

Wolframm showed several video clips on which a horse was highlighted with dots all over his body. These were the judges’ primary focal points when watching a horse compete. Certain areas are looked at significantly more than all other. “This gives an idea of the patterns of attention,” she explained.

The audience commented that they look at the silhouette of the horse, to which Wolframm replied , “you scan the horse by looking at different fixation points to determine what the silhouette is. You look at lots of different things and then make up a whole.” 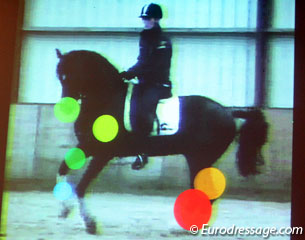 Her research revealed that it is hard to compare the scores between judges on the long and short side because of their position in the arena. “They are looking at different focal points.”

The goal of Inga’s research is to create a tool for the future education of judges. “Teach them what bits they should look at to get a good assessment." She wants to help “future judges to have a better feel for what they should be looking at.”

Clayton: Rhythm and Balance in the Canter 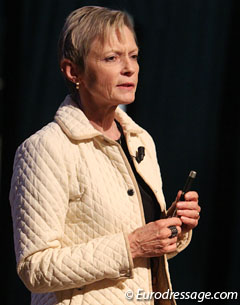 Dr. Hilary Clayton’s break-out session started off with a slow, almost weary exposition on the rhythm of a horse’s canter, but the session re-found vitality in a discussion in which certain trainers strangely disagreed with the scientific evidence that Clayton provided.

The general description of a canter is a 3-beat gait in which two of the legs contact the ground at the same time. “Canter has an irregular rhythm, not a faulty one. It’s 3-beat with a suspension phase which gets longer in the medium and extended canter. It can be absent or very short in the collected canter,” said Clayton. “The canter rhythm is the same as in music in a 4/4 rhythm. You have one, two, three and then a rest. This is why Waltz muzic does not work for canter.”

The difference with trot is that the 2-beat gait has diagonal dissociation. If the horse is balanced downhill in trot, the front leg will hit the ground first, while with uphill horses the hind leg is touching the ground first. Canter has a rocking motion: first the horse goes uphill, then he’s level and then downhill. “The weight rolls forward from the the hind legs to the forelegs. This is different from walk or trot.” 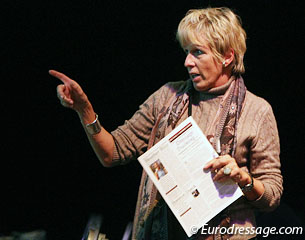 O-judge Katrina Wust differed with Clayton’s finding that says in collected canter the front leg is put down first to sustain the balance. “The front leg controls the rocking motion and holds the forehand upwards,” Clayton explained, but Wust disagreed. “It’s the negative way of collection,” Wust said, “when the frontleg come first, the hindquarters don’t know where to go. The horse gets croup high or crooked.”

Dutch rider Elisabeth Geluk presented the 10-year old Dutch stallion Uno (by Jazz x Rubinstein) as a case study for the audience to train its eyes on the rhythm of the canter.
Clayton also showed a series of video clips of horses in an impure canter. The first one featured a horse totally disconnected in the body, the second was a horse with a square, lateral canter. “The front leg is on the ground very early. It’s an exaggerated four beat with a diagonal dissociation,” Clayton explained. “The hind to hind contact is longer than the front to front contact. Often horses with badly fitting saddles tend to do the lateral canter.” 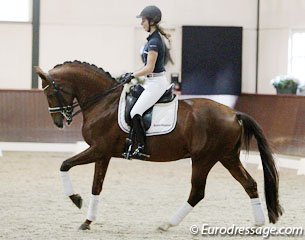 Clayton’s session reached an apex when the American researcher and Grand Prix rider scientically proved that an ultra-collected canter (one for a working pirouette or pirouette) becomes 4-beat. “The hind legs are more flexed, the muscles in the hind legs used more to lift and lighten the forehand. There is greater flexion of the hip joint. The canter in pirouettes becomes 4-beat as both hind legs are on the ground to lift the forehand.”

In a panel discussion Clayton was asked if it were a good idea to have the FEI Judges Handbook changed concerning the definition of the rhythm of the canter in the pirouette. Based on Clayton's slow-motion videos the handbook might need redefinition. “We ought not to be relying on video slow motion data to set the rules of the sport. What we can see with our eye should be the determining factor. Science helps us what is actually happening and is improving our skills. There is no 3-beat canter in the pirouette. To have that in the rules is a bit of mockery.”

McLean: Overshadowing as Technique for Desensitization

Australian animal behaviourist Andrew McLean invited the break-out group to come to the second, smaller indoor arena on the Bartels’ property for his session on desensitizing horses for fearful stimuli. 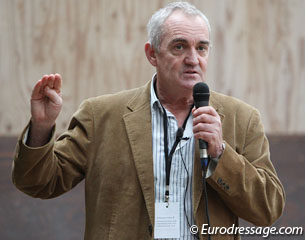 Habituation is a process for animals to learn not to react to fearful stimuli. It makes animals more efficient in their environment instead of shying from things that don’t matter.
McLean said that modern-day breeding programs have bred much more flight response into horses. “Horses now are way more reactive. The flight response was ok with the old, dull horse, but these ones are much more sensitive,” McLean said. Horses have the biggest amygdala of any domestic animal which triggers the flight response.

The fear response is “fast legs going far,” McLean stated. “Stopping of happening them to go fast and far is important otherwise it will mount up and add to a battery of fear responses. Keep your horse’s legs under your control. In dressage you don’t want a random step either.”

Gradual habituation: the horse is free to escape and you practise escape behaviour by gradually closing it in. The consequence is that the fear response may return spontaneously. “Animals can learn to forget things (extinction), but not for the fear reponse, it’s indelible,” said McLean. It will be stamped on the horse’s brain that it’s good to go fast and far. “Do as little as possible to induce fear and as much to reduce it.”

Response prevention: the handler holds the horse and makes him acquainted with the scary object by touching the horse with it. “The problem is that flooding might occur, where you expose an animal to a threshold of fear. It might be worse for him so you have to keep the threshold levels low.”

Approach conditioning: the chase-method. Teach a horse to chase the object he’s afraid of, like balls or tractors dragging the arena. The horse habituates to objects that it’s chasing. If a horse shows investigative behaviour its demeanor changes. “It adds to make the horse brave,” said McLean. 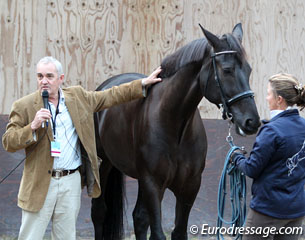 Stimulus blending: This strategy can be used for horses which are, for instance, afraid of aerosols (fly sprays). If your horse is already habituated to the hose, you hose him while spraying the aerosol. Afterwards the hose disappears and the horse is sprayed on his damp coat. Then you do it on a dry coat because the feeling is different for a horse. “You break down the features of an aerosol; the look, the sound, the feel of it,” said McLean. “A horse that is head shy you use a damp towel to touch him with and then slowely remove the towel and use your hands.”

Counter-conditioning: this is classical conditioning to signal the arrival of a good thing such as food. You turn the clippers on and feed the horse. Positive re-inforcement is used to reward the horse.

Overshadowing: the animal is exposed to two strong stimuli at the same times. For instance when a horse is afraid of the broom, you handle him from the ground and make him step back and forward while introducing a fearful stimulus. “It’s not about distracting him, but it’s a learning process. He diminishes his reactions very fast,” McLean explained. The technique comes from human psychology and is used to cure people with phobias and post-traumatic stress disorder. “It’s a good method for girthy horses. When you girth them, you make them step backwards.”

To put the overshadowing into practise McLean and his assistant Jody Hartstone were given a huge black gelding who is terrified of brooms. Jody first did some groundwork with the horse, making him react to her signals to step forwards, backwards and side ways on her commend and to stand totally still when not given a cue. 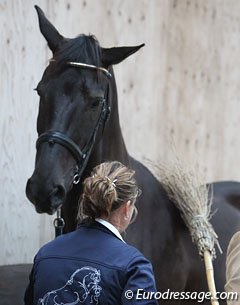 “Horses with conflict behaviour, tension, are best taught to stand still. It will make a difference. Teach a horse to stop instead of having a flight response,” McLean stated.
The horse was initially slow in his reactions to the groundwork and Jody had to tap the horse with the whip quite hard (on the boots). He appeared almost too mellow in his attitude until the broom appeared. The black was never dangerous but snorted heavily and shied away from it. He was positioned against the kickboards with one side and asked step backwards and forwards while someone was sweeping the floor. He did not fully relax and Mclean took over the broom and touched him with it (flooding) until he calmed down.

McLean said that scratching the withers is a good way to reward and relax a horse. “Horses are the only animals that have a major response to it. It brings their heart beat down.”
With the black gelding Jody also tried the chase method. She allowed the horse to sniff the broom and take a step forwards. Each time he took a step backwards, she asked him to move one step forwards again.

The horse showed that the noise the broom made was the most upsetting thing for him of all as soon as Jody swept the kickboards and the wall to test his reaction. Often there is an underlying fearful stimilus which scares the horse. “Don’t avoid issues which makes a horse nervous, retrain it,” McLean stated.

At the end of the 40-minute session the black was not yet fully confident and in "real life" this horse needed several more training sessions to accomplish full desensitization.

Next Page of the report: Bitless or Not, It’s About Having the Choice