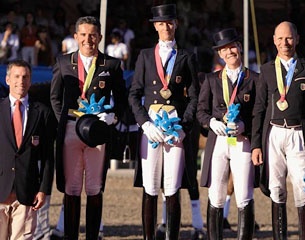 The U.S. Dressage Team's Gold medal never looked in doubt at the 2011 Pan American Games. They started off confidently and with each ride, the margin improved. They stormed to victory and won their fourth consecutive Pan American Games Team Gold medal - a first in the sport of Dressage. Their combined average score of 74.421% left them well clear of the Canadians who won Silver with a combined average of 70.413%. Colombia put in a valiant late effort to surge into the top three with 69.632%.

Led by Olympic veteran Steffen Peters (San Diego, CA) on Weltino's Magic - the only combination to score over 80% - the U.S. Team put on an exhibition. Peters score of 80.132% is a Pan American Games record. A strong anchor rider, Peters had the luxury today of a little less pressure due to the fact that the entire team put in top 10 performances.

"It was one of the best tests this horse has done," said Peters. "I have to say a big thank you to my teammates because they gave me a very relaxed position to start in today. Over the past few years I have always had to carry a lot of weight on my shoulders as the very last rider but the team did an awesome job, every single horse, every single rider."

Runner-up individually in the Team Competition was Heather Blitz (Wellington, FL), whose elegant effort on Paragon left her with a score of 75.105%. It was a personal best for Blitz with this horse.

"Today he had a super combination of obedience, which is pretty normal for him to be so obedient for me, and energy and relaxation," said Blitz. "It was really the best I've ever had him and to say that in a championship like this - I'm really patting him and myself on the back too."
The Ground Jury led by Lilo Fore (USA) at C today, included Gabriel Armando (ARG), Stephen Clarke (GBR - President), Raphael Saleh (FRA) and Cara Whitham (CAN), was unanimous in the placing of the first two horses.

Marisa Festerling (Moorpark, CA) finished fourth individually behind Costanza Jaramillo on Wakana from Colombia. She rode Big Tyme in their Games debut and looked like a seasoned veteran in the process. Cesar Parra (Whitehouse Station, NJ) proved a valuable lead-off rider for the U.S. Team, he was consistent and accurate - setting the mark high on Grandioso, they ended the day 10th place.

This is how Team Gold unfolded for the U.S. Dressage Team:

Cesar Parra and Grandioso: tenth individually on a score of 69.526%

Cesar Parra led the U.S. effort off this morning with Grandioso. He did his job as the pathfinder, he put in a solid confident effort without any mistakes. Riding for Michael and Sarah Davis, Parra orchestrated a command performance from the beginning and scored 69.526% for his effort.

"I'm happy with what we've got in there," said Parra after his ride. "Obviously I always want higher marks. But I had the responsibility as the first rider in the team and I take a lot of pride and responsibility in doing that. I think delivered to my team what we needed to. We have a mission here to bring home gold so hopefully that will work. I'm excited and happy to be here. He was a great horse in there, he's a wonderful horse and I am incredibly blessed to ride and to be here."

Parra feels that the 10-year-old Westphalian gelding has some room for improvement going into the Individual Final tomorrow.

Marisa Festerling and Big Tyme: fourth individually on a score of 71.921%

"I thought it went great," said Festerling. "(Big Tyme) felt incredible. Just the feeling from up top was super, he was relaxed but alert in the arena but he was listening to me which is the best you could hope for."

Festerling rode the 10-year-old Belgian Warmblood through a beautiful half-pass and very clean flying changes. They had one mistake, where Big Tyme overreacted when Festerling downshifted for the canter pirouette.

"I've ridden him since he was four years so we know each other really well," said Festerling. "I thought my ride was pretty flawless there was one little bobble coming in to the pirouette he almost collected too much but I caught him really quick and I think we got it back on track as quick as we could. Everything else I thought was really super. I couldn't be happier and I couldn't ask for more. "

The pressure of her first team trip down the centerline didn't seem to faze either Festerling or Big Tyme.

"It was amazing to ride in there, I just thought 'We're here, we did it. This is such a joyful occasion.' I was just so happy," she said. "I just thought that we were going to go and do our job and he gave me a great feeling and a great confident feeling because he was relaxed and happy."

Heather Blitz and Paragon: second individually on a score of 75.105%

Third in the order for the US side was the biggest horse on the team (and arguably the competition). Paragon has tremendous movement and he brought it all to Mexico. He was relaxed and comfortable in his first championship defying his eight years of age. Heather Blitz rode with confidence and the pair thrived in the atmosphere. They made no mistakes - the trot work was elegant and the canter was powerful, she rode accurately and the Danish Warmblood gelding delivered.

"In the warm up he was super, super relaxed," said Blitz. "Since he's been here he's been a little excited and I've really liked his energy but today he still had his energy, he wasn't tired by any means, but he's just really settled now. Today he had a super combination of obedience, which is pretty normal for him to be so obedient for me, and energy and relaxation."

It was a personal best for the pair by Blitz's analysis and she was proud of what she has accomplished with the horse she has had since he was born.

"It was really the best I've ever had him and to say that in a championship like this - I'm really patting him and myself on the back too," she said. "So now its hindsight, I guess my lead up to this championship has been really good. I guessed well, because it's always kind of a guess, how much to train and how to make them peak at the right moment. But I really feel like that this was the peak of his career.When I go in the ring, I always just completely erase my external environment. I know it exists but I don't let it get in my head. It's just the 20x60 arena like it always is and I tried to ride with precision, letter by letter and kept in mind all the things Anne (Gribbons) has been helping me with over the last week, her little tweaks. Her judges' perspective is invaluable."

Steffen Peters and Weltino's Magic: 1st Place Individually on a score of 80.132%

Steffen Peters delivered on the expectation that he would put in a clutch effort and the reigning USEF National Champion didn't disappoint. By the time he went into the ring (5:00PM) his teammates had done a fantastic job securing top scores. Peters rode Weltino's Magic with the confidence and determination for which he is known and Jen and Bruce Hlavacek's 9-year-old Westphalian gelding delivered at his first championship.

"I was extremely happy, it was one of the best tests he's done..." said Peters." Magic topped it today with really, really good pirouettes, very good trot work - even the trot extensions felt good which sometimes can be a little bit his weak point. On top of that he walked really, really relaxed. I was so happy about it I actually got a little close to where I had to pick up the canter and I almost ran out of space because I was so excited about that super walk. There wasn't a single flaw in the test and for that to happen when it matters the most that shows how reliable and how exciting Magic is so I'm super happy. I am very, very thankful to Bruce and Jen Hlavacek who let me ride such a wonderful horse."