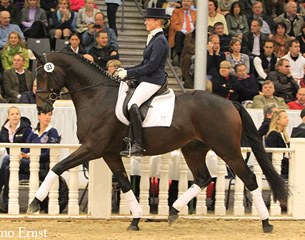 The Hanoverian auction centre in Verden, Germany, wrote his history yesterday by selling the 3-year old licensed stallion Lemony's Nicket for a record price of 900,000 euro at the 2011 Hanoverian Autumn Elite Auction.

The American company Harmony Sporthorses acquired the bay Londonderry x Weltmeyer stallion and will put in training and stand him at stud at Ingo Pape's station in Hemmoor, Germany. Lemony's Nicket was also the 3-year old Bundeschampion in Warendorf this year.

The auction sales price of 900,000 euro is a record for a Verden auction, though not the overall record in Germany.

The second highest knock down price was for the Hanoverian mare Lady Dance (by Londontime x Wolkentanz I). A client from Belgium paid 165,000 euro for the 3-year old mare which was a reserve champion at the Hanoverian Riding Horse Championships and Bundeschampionate this year.

85 horses in total were sold for an average price of 43,282 euro, a price heavily boosted by the price highlight.

41 foals were presented for sale at this auction. The top seller was the chestnut colt Quuno (by Quaterback x De Niro) which moves to Russia for 60,000 euro.