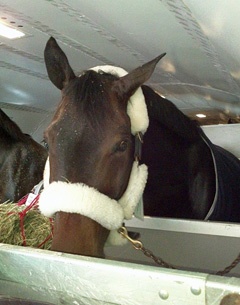 Despite the remnants of Hurricane Jova drenching Guadalajara, Mexico, the U.S. Dressage Team arrived without incident at the Guadalajara Country Club, the venue for the Dressage and Jumping disciplines for the 2011 Pan American Games. The four horses, Big Tyme, Grandioso, Paragon and Weltino's Magic arrived on Tuesday afternoon.

They were joined by their grooms, Dr. Rick Mitchell, the team vet, Julie Mitchell, his wife and vet tech, the Canadian horses and their team and a dressage horse from Ecuador. Tim Dutta orchestrated the effort with the help of Tex Sutton Forwarding's crew and all of the horses arrived in great condition. After a good night's rest they were happy and bright this morning looking for something to do.

The two-legged athletes arrived Wednesday midday, after navigating USOC Team Processing in Houston on Tuesday. They were all happy to arrive and cleared customs without issue. They came in on the same flight as The U.S. cycling and swimming teams with Chef d'Equipe Eva Salomon, Team Leader Jenny van Wieren and Technical Advisor Anne Gribbons. Steffen Peters (San Diego, CA) is an Olympic veteran at his first Pan American Games, but for Heather Blitz (Wellington, FL), Marisa Festerling (Moorpark, CA) and Cesar Parra (Whitehouse Station, NJ), it was their first trip to USOC Team Processing.

"It was awesome," said Festerling about Team Processing. "It was super exciting, we had everything we wanted. We got to try everything on and they had an army of people there to help us. The stuff is awesome, it's all Nike, we got so much stuff - they were super generous, our grooms have all the exact same attire that we have. It was really fun." 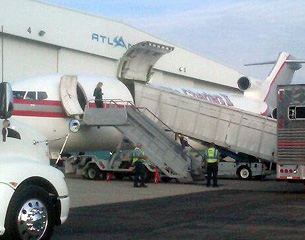 All the athletes (horses and humans) had a schooling session in the soggy conditions, and although they are still putting the finishing touches on the venue, everything is starting to take shape.

"It's amazing," said Festerling about arriving on the venue of her first Games. "I've only been here one day and it is an incredible experience. Each new thing we do is new to me and that makes it, of course, even more exciting."

The first jog is on October 14th at 1PM, and so they will spend a couple of days training before the competition officially gets underway.