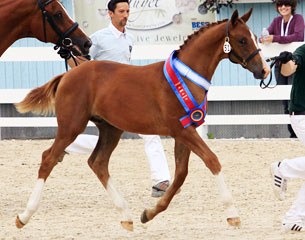 The world-famous breed show at Devon began today with some of the America's most exciting dressage prospects present. Day one winners include Dorian Gray, Dazzle, El Paso ISF, Grand Jewel WRF, and Cha Ching. Except for the specifically designated individual Breed Classes, all classes were open to horses of any breed and horses could compete without regard to color, size, pedigree, or origin.

The Young Horse/Sport Horse classes included all horses up to and including three years of age. “The breeding of sport horses in the United States has taken a quantum leap in the last decade,” said Melanie Sloyer, Breed Division Chairperson. “Today set the stage for a great 2011 show.”

Shining brightly in 2011 to capture top honors of the Colt Championship was the Dutch warmblood Dorian Gray (by Sydney X Haarlem) owned by Erin Brooke Freedman and bred by BCM Bosman Muller. Reserve Champion went to the Oldenburg Schigazzo (by Schiffon x Rohdiamant), bred and owned by Lea Ann Hansen.

The Dutch warmblood Dazzle (by Jazz x Special D x Houston), bred by Victoria Lamas Wanner and owned by Taylor Minnucci, did not disappoint in 2011. This animated three-year old filly was close on El Paso ISF’s tail in 2010. “She is always wanting to show and not afraid to give it her all. She wants to dazzle!” commented Bruce Griffin, handler, after winning not just the 2011 Young Horse Champion but also the Group Filly Championship. Reserve Champion went to Bahia Breeze (by Benneton Dream x Banditentraum), owned by Michelle Ryan.

General Manager of Hilltop Natalie Diberardinis said, “Dressage at Devon is in Jane’s back yard, so it is always exciting to win a class here, much less a championship. We are very, very pleased with him.” Cha Ching is part of a family of winners from Hilltop Farm that include Comtesse, her dam, and Contucci, her sire.