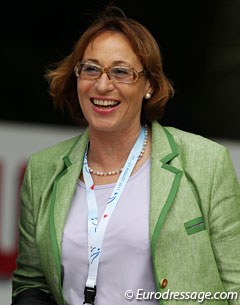 The Ground Juries for Dressage at the London 2012 Olympic and Paralympic Games and the Reem Acra FEI World Cup™ Final 2012 have been announced following blind draws at the FEI’s headquarters in Lausanne (SUI) today (23 September).

“The international judges representing the Ground Juries for London 2012 and the World Cup™ Final 2012 are extremely happy about their appointments. The FEI will be marking 100 years of equestrian sport in the Olympic movement at London 2012, and the stunning location of Greenwich Park means that we will be at the heart of the Olympic and Paralympic Games. The World Cup™ 2011/2012 series will see riders from four different leagues aiming to qualify for the Final in ‘s-Hertogenbosch next April and we expect to see brilliant performances as always at the finale of the indoor season.”

The FEI’s Dressage Committee proposed a long list of judges for the London 2012 Olympic and Paralympic Games according to FEI rules, which state that there can be up to 12 5* judges, a maximum of two per country and from a minimum of eight countries.

There can only be one judge per nation and a total of seven judges on the Ground Juries for the Olympic and Paralympic Games, so the first names to be drawn - providing there is not more than one from any nation - are appointed to the Ground Jury.

A total of 11 5* judges from eight nations were on the long list for the London 2012 Olympic Games, including Stephen Clarke who as a host country judge has already been appointed as President of the Ground Jury.

The same rules apply for the long list and draw process.