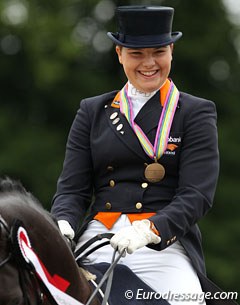 Dutch junior team rider Anne Meulendijks has become an official staff member at Tineke Bartels' Academy in Hooge Mierde, The Netherlands. The 18-year old is replacing Pim Candel, who decided to go independent and resigned from the Academy a few weeks ago.

Anne Meulendijks is one of Holland's most successful youth riders. In 2008 she was member of the Dutch pony team at the European Pony Championships. She won team silver and finished 11th individually with Boticelli.

In 2009 she made her transition to junior rider's level with Tom Tom Go (by Cabochon), a horse which her parents bought from Dutch pony chef d'equipe Christa Laarakkers. While the bay Dutch warmblood provided her good experience, it was Grand Prix schoolmaster Ohio (by Indoctro) which became instrumental for her career.