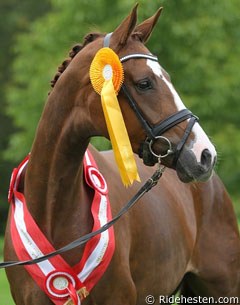 The chestnut 3-year old Danish warmblood mare Prima Donna has been named Mare of the Year 2011 at the 2011 Danish warmblood elite mare show in Vilhelmsborg, Denmark, on Sunday 11 September 2011.

Seven 3-year old mares were decorated with the "gold medal" which implies that they were the premium mares of the year with the highest scores in the mare performance test and at the elite show. Four of those seven mares were dressage bred.

Prima Donna is by Don Romantic x Andiamo and is bred by Birgitte Hofmeister from Hirtshals, Denmark. She is owned by Andreas Helgstrand. The chestnut mare received the highest score of the year, 904 points, in the mare performance testing and got four 10s, for instance for type and canter

"A rare top horse with international capacity," said the Danish warmblood selection committee. "She's extremely elastic with ground covering, bouncy gaits with much freedom in the shoulder and engagement from behind."

The seven gold medal mares are: