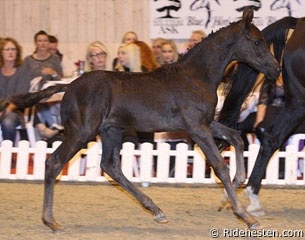 Future Jazz RV (by Jazz x Florestan) became the price highlight of the Danish Elite Foal auction held on Saturday 10 September at the Elite Mare Championship in Vilhelmsborg. The foal sold for 165,000 DKK (22,160 euro ) to Sweden.

The second post expensive foal was Zackit (by Zack x Rush Hour), which sold for 110,000 DKK

Ulrik Kristensen, head of the auction committee, expressed his satisfaction with the result of the auction and was particularly pleased with the high percentage of foals actually sold. "The clients are there when you present quality foals of interesting pedigree, and the owners have learned to let their foals go when there is a good bid. It is also of great importance that we have found the right concept of the elite show combining breed and sport classes whereby we get breeders as well as riders at the auction."