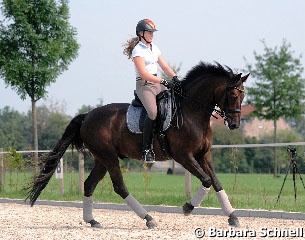 The Krieg family discovered Special Edition in the stables of Laura Bechtolsheimer in the United Kingdom. The dark bay has been trained up the levels slowly and will now be prepared for the junior rider's tour by Krieg's trainer Stephanie
Meyer-Biss.

"Spezi is a wonderful type. He's compact and very rideable," said Jessica. "When he arrived here he was quite nervous. He seemed to miss his mates as he doesn't like to be alone. We first gave him a big stall with paddock in a quiet area of the barn but that wasn't his thing. Mrs Meyer-Biss believes that he preferred to be outside with the ponies and that was it. He's been very happy ever since. Because I still have to learn much, Mrs Meyer-Biss will start his training first and I'll ride him regularly," she explained.