Furstenball in Golden Shape at 2011 Bundeschampionate 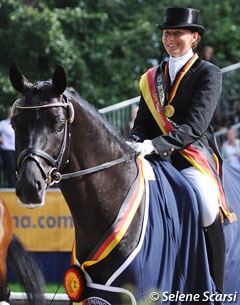 Ines Westendarp and the Oldenburg licensed stallion Furstenball OLD (by Furst Heinrich x Donnerhall x Classiker) were on form in the 5-year old dressage horse Finals and were good for gold at the 2011 Bundeschampionate in Warendorf, Germany, on Sunday afternoon 4 September 2011. A torrential downpour struck the show ground at the end of the class and two of the medallists had to perform in poor weather conditions. Fortunately for the prize giving the sky cleared and the sun shone down on the winners.

Owned by Danish Lone Boegh Henriksen and Paul Schockemöhle, the dark bay Oldenburg licensing champion was feather-light in trot, brilliant in walk and super solid in canter. The horse has beautiful freedom in the shoulder and tracks up well behind in trot. His massive ground cover and total relaxation in walk were unparallelled and in canter he showed very nice self carriage and outstanding simple changes. Even when he was given the long reins in trot, Furstenball did make one step less expressively. His entire career the stallion has been trained and competed by Ines Westendarp, who is coached by her husband Johannes and at shows by Dr. Ulf Möller. A few points of improvement could have been the turn on the haunches, more bending in trot in the corners and there was a slight problem in the rhythm of the extended trot at the beginning of the diagonal. In canter the stallion slightly dropped behind the vertical but he remained attentive to the aids at all times. 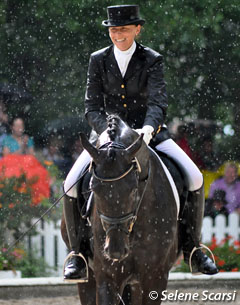 It was a marvellous ride to watch and the judges, who had been in the mood for high scores already from the beginning of the class, scored the test with an overall of 9.4. "This is a totally strinking horse which is light footed in trot, closed from behind with nice regularity and balance," said commentator Christoph Hess. Furstenball got 9.5 for trot and 9.0 for canter. His walked scored him a 10. "It can't get any better than that," Hess added. With a 9.0 for submission and 9.5 for general impression, Furstenball added the Bundeschampion's title to his already impressive list of achievements.

The 2011 Bundeschampionate have been a "river deep, mountain high" roller coaster of emotions for German born American Jennifer Hoffmann. After she was very strongly in the lead with Hofmarschall (by Hotline) in the 4-year old riding horse stallion finals, the horse refused to go under the guest judge riders and reared on numerous occassions, making him lose the gold and finish with bronze yesterday afternoon. Today gold was again around the corner, but Hoffmann and her 5-year olf Westfalian Florentinus V (by Florestan) were pipped by Furstenball. The new duo, which has been together for less than one year, earned silver with an impressive score of 9.2.

The long-legged bay gelding Florentinus V has a wonderfully active hind leg in trot and always stays up in the frame. He moved smoothly on all curved lines and voltes in the trot segment of the test. In extended walk the horse has massive overtrack, but the nose could have been slightly more out. His canter was very balanced and he did seamless simple changes. 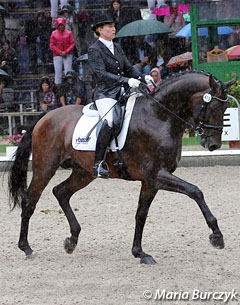 Hoffmann was equally challenged by the weather as she also had to ride in the midst of a downpour but her concentration didn't falter. "She deserves top applause for a top ride in this horrible weather," said Christoph Hess. The combination received solid 9 marks for all segments: 9.0 for the trot, which was praised for its "nice spring" and "good overstep in the lengthenings." Owned by Gestut Letter Berg, Florentinus V got 9.0 for walk and canter and 9.5 for submission and general impression, which brought the total to 9.2.

Tessa Frank and Gestut Nymphenburg's huge black Hanoverian gelding Simply Nymphenburg (by Sir Donnerhall I x Weltmeyer) moved from a 9th place in the preliminary round (8.20 score) to a pleasantly surprising bronze medal position in the finals (8.9). The black is a big mover in trot. His huge strides and lofty suspension make him a very ground covering mover. He could have been more closed in the frame and the working trot looked more like a medium trot, though the powerhouse still had plenty of lengthening in his tank in the medium and extended trot. 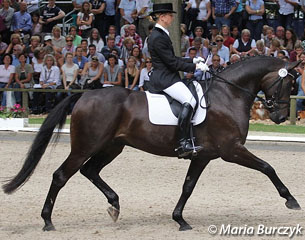 The turn on the haunches was problematic but the extended walk was well regulated. Also in canter, Frank had total control over her horse. The canter was uphill and in counter canter the horse did not lose his self carriage nor balance.

The pair scored generous 9s for trot, canter, submission and general impression and an 8.5 for walk. His 8.9 total score placed him third and well ahead of fourth ranked Christine Nolden on her home bred chestnut mare La Lopez (8.6)

Back to the 2011 Bundeschampionate Index