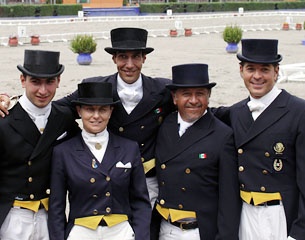 The Mexican Equestrian Federation has announced the team that will represent host nation Mexico at the 2011 Pan American Games in Guadalajara, Mexico, on 16 - 19 October 2011. Based on the four best scores achieved at three official selection trials, five Mexican riders were officially selected for the team.

The reserve rider is Santiago Ortiz on Sjoery Bantha, a KWPN gelding by Kenwood.