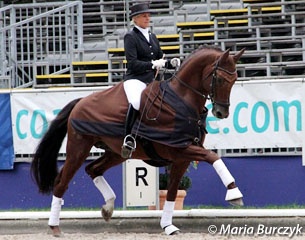 Gräf and the World Young Horse Championship silver medal winning Damon Jerome H were extremely solid in their test in which the rideability, obedience and accuracy were the highlights. The horse as a bouncy trot, fantastic walk and a solid canter. He performed all flying changes correctly but could have shown more bending in the corners and half voltes. 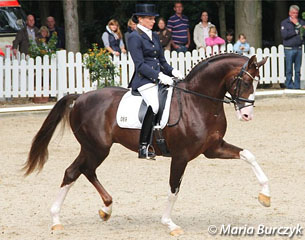 Anna Sophie Fiebelkorn and Callaho's Benicio (by Belissimo M x Velten Third) deservedly finished second with 9.0. Only two horses were able to crack the magical 9.0 marker today. The chestnut Benicio with his white stockings and blaze made a smashing impression in the show ring which his cadenced and well suspended trot and fabulous canter. He is owned by the South African based Callaho stud.

Back to the 2011 Bundeschampionate index