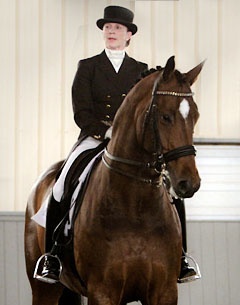 The dressage portion of the Pan American Games will be held from October 16 – 19, 2011 at the Guadalajara Country Club.

The nominated riders are:

Tom Dvorak's reserve horse is Corrigan, owned by Karen Thompson-Harry. In qualifying Corrigan, Dvorak is able to use the horse as an alternate should Viva’s Salieri W be unable to compete at the games.

“We have an exceptionally strong team nominated to the Pan American Games this year,” said Gina Smith, chef d’équipe for the Canadian Dressage Team. “I am confident that we will reach our goal of qualifying for the Olympic Games with the consistency that the riders have shown through the selection process. We have had excellent support from our technical leader, Markus Gribbe, and continue to improve with his help.”