Climbing the Ladder in the Grand Prix Special 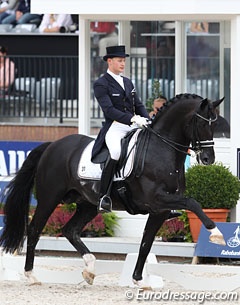 Even though only three riders end up on the podium there were about six or seven combinations in total who could have finished there as well in the Grand Prix Special at the 2011 European Championships in Rotterdam, The Netherlands, on Saturday 20 August 2011. If only their rides had been better. In their attempt to climb the ladder, their scores went up compared to the Grand Prix results, but not all of them performed to their best potential. Still the quality of riding was at unprecedented heights and the Special was one of the most exciting classes in dressage history.

Totilas, Flavour of the Month No More?!

Being a 10 million euro, gold medal winning stallion does not automatically guarantee a spot on the podium. This become painfully clear as the sympathetic 26-year old Matthias Rath was unable to present Totilas (by Gribaldi x Glendale) on top form in the Special. Totilas is no longer the flavour of the month with the judges and in the presence of a handful of equally exceptional horses the black has became a "mortal" one. He now has to earn his points like any other top horse in the competition. This was not the case when Gal was riding him and many undeserved points were thrown at the horse like confetti (as well as well earned points of course).

Rath and Totilas entered the arena and started with an abrupt halt at X. The first trot extension had zero overtrack but the movement improved towards the end of the test. The passage and extended trot transitions were lovely to watch: the horse pulled his legs very high but stayed regular. The extended walk was outstanding: super big strides and good relaxation. Then the problems started. In the first piaffe Totilas lost the rhythm and made a big jump forward but Rath persisted and showed the required amount of steps. The passage that followed was not regular and there was a major build-up of tension. The second piaffe was on the spot but the stallion lost his forwardness and crawled completely behind the vertical. There was a problem in the canter half pass and the two tempi's were very crooked. In the one tempi's the horse became tight and deep in the neck even though he made big changes. In the pirouette left he lost jump and then there was a mistake in the one tempi's on the centerline. The final extended trot was better than normal and the last piaffe-passage centerline was decent. 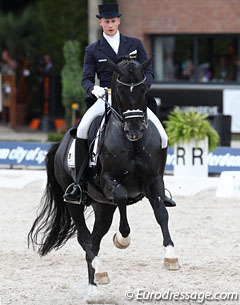 Rath posted a score of 77.039% but his marks ranged between 73.229% from Dutch judge Fouarge and 80.208% from French judge Roudier. The best performing German finished fourth and missed out on a highly coveted and anticipated podium place. "I had to repeat the performance I did in Balve or Aachen, but that didn't work," Rath told the German press. We certainly did not have the performance that I had imagined. In the entire test I didn't get Totilas in front of my aids. I wish I had this experience somewhere else instead of at the European Championships. Fortunately tomorrow is another day. We have the chance to go in again and try a new."

It was staggering to hear the reactions to Totilas not finishing on the podium while under Gal the magical black stallion has never gone home without three sets of medals at the two major championships the Dutchman rode at. The Dutch media were rubbing their hands and jesting "Totilas, the living legend has died", "the king is dead, long live the queen", and "cheap stallion for sale". These were some of the rude jokes that floated round. Justice served cold was the general message in the voicing of frustrated feelings of many Dutch dressage fans who saw their prize stallion move to rival country Germany. That's what you get when you hire a PR machine to brag about major accomplishments not yet achieved with the new young rider. With all the pressure that his young talented rider has to do deal with, one felt desperately sorry for him as it was a bit sad that he could not live up the expectations the Totilas' team itself has oracled about this past show season. Rath has only been riding for 10 months and helped push the German team back into a silver medal seat after bronze at the 2010 WEG. That in itself is worth much. Maybe keeping a low profile before going into the show ring had been worth more: speech is silver, silence is golden. 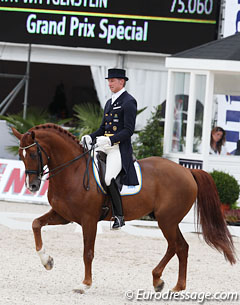 Swedish Patrik Kittel is certainly knocking at the door with good intentions to win a medal as well. Aboard the Dutch owned KWPN stallion Scandic (by Solos Carex x Amiral) the German based Swede began his Special test with great care, riding the trot - passage work in safe mode. The halt at entry was not immobile and stretched and the half pass left was passagey but the passage in itself was extremely rhythmical. While Kittel kept a very steady, quiet contact the horse did look dead in the mouth but he was sharp on the aids nonetheless. The extended trot were brilliant. The extended walk had much overstep but the noise could have been slightly more out. The piaffe and passage had amazing cadence but in piaffe the horse could sit a bit more and sometimes he tilted a bit to the left. In the two temp's, one change was a bit short, but it doesn't help that the rider is wagging in the saddle during the changes. The pirouettes were good but in canter Scandic lost his clear 3-beat in between movements as Kittel collected him so much and wanted to prepare each movement very delicately. The final centerline was a real power-statement and earned him many 9s. Kittel finished fifth with 76.771%

"We are slowley getting there, Scandi man was a bit scared on the warm-up, so I had to ride wih the handbrake a bit in the beginning but then he was much better.  A fright during the early stages of my warm-up rattled Scandi-Man and we never fully recovered from it," Kittel explained. "We entered the arena with Scandic still a little on edge and it showed for the beginning of the test. He then settled into things and got better and better. We're number five and I'm really happy," Kittel added.

Valegro with a Tank Half Full

The 26-year old Charlotte Dujardin and her young 9-year old Dutch warmblood gelding Valegro (by Negro) were strong candidates for the bronze but couldn't make their Grand Prix magic happen in the Special. The chunky but über-cute dark bay, mousy-grey gelding seemed a bit tired and was not as sharp on the aids. 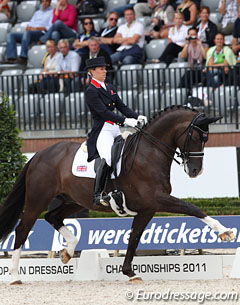 The trot extensions were world class though and why they are not putting straight 10s on the board is a miracle: they are so powerful, there is so much lengthing of the frame and the horse is uphill. The trot half passes were big in ground cover and the passage was regular, but the gelding should have been a bit more engaged from behind. The extended walk was active with two hooves overtrack. Valegro travelled a bit forward in the first piaffe and the second one was fabulous with amazing sit. Charlotte stuffed the two tempi's but the ones were huge and Dujardin needed the entire diagonal to finish them. The pirouette left was wonderful but then another mistake happened in the one's on the centerline. The pirouette right was brilliant. By the final centerline, Valegro seemed to have given its all and ran a bit out of steam in the passage. At all times Dujardin was calm in the saddle with a steady, soft contact.

The British team rookie scored 76.548% to finish sixth. If she can stay fault-free in Sunday's kur to music, she might end up on the podium.

Isabell Werth is such an amazing rider and always so much fun to watch. This multi-medal winning rider has nothing to lose because she's already won it all and that really showed in the Grand Prix Special. Her young El Santo NRW keeps struggling with the piaffe as he loses impulsion like a bad souffle losing its puff coming out of the oven. Werth wanted to make sure that this didn't happen again and she came into the ring flying. 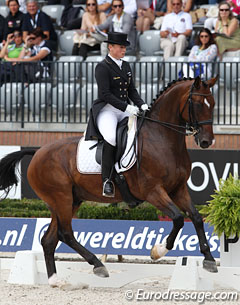 The first trot extension was wide behind but massive in ground cover, all other extensions were phenomenal. The half pass left needed more balance. The passage was engaged and regular and the transitions were immaculate. At the beginning of the extended walk, Ernie needed to be spurred forwards. The walk was good though with much stretch in the neck. The first piaffe was small but rhythmical, in the second the horse lost his impulsion again. Isabell is a very accurate rider who rides on the marker and literally crosses her tees in punctuation. The two tempi's were big, but in the ones it went wrong. The bay Rhinelander also made an unscripted flying change after the extended canter. The pirouette right was fantastic, the left one ok. In the final extended trot Isabell Werth even added a notch, when you thought she was already at the end of the belt. The final centerline was good. The piaffe at X was reasonable but wide in front.

You have to give it to Werth. She really takes risks and invites her horse to go on the same adventure as her in the test. Wonderful! THe German finished seventh, but the judges disagreed on her mark. Markowski scored her ride 80.000%, while Clarke only gave it a 73.958%. Luckily with seven judges the influence of each individual judge is less strong which made the score even out to a 76.533%