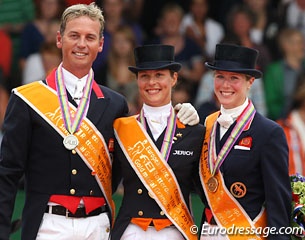 It were nerves of steel that mattered to win the Grand Prix Special at the 2011 European Dressage Championships in Rotterdam (NED) on Saturday 20 August 2011. The class was a thriller of a show with so many high calibre horses entering the battle field one after the other, all rivals for a podium place. Adelinde Cornelissen was the only one to remain fault free and even her going off course did not make a difference. The Dutch anchor rider won gold and beat Carl Hester and Laura Bechtolsheimer to the finish.

Cornelissen had true tunnel focus going on as she stayed totally unphased after judge Mary Seefried rung the bill in the middle of the test because the rider made a program error when she did the two tempi's instead of the canter half passes. Automatically 14 points (7 judges minus 2 points) were subtracted off her score, but the 0.417 % point reduction had little effect. Cornelissen was supreme today with her incredibly strong and empowering ride.

Cornelissen had her 14-year old Dutch warmblood gelding (by Jazz x Ulft) sharp on the aids and fortunately less strong in the contact. Her half halts were coming through much more subtly than usual which made the overall image so much more appealing. It was a breath of fresh air. The horse was slightly wide behind in the halt at entry but he immediately showed high class trot extensions, huge half passes, super passage and flawless transitions between passage and the extended trots. In the extended walk he could have been slightly more swinging through the back with his nose more out, but there was plenty of overtrack. The piaffe had a super rhythm and was on the spot but the croup was high. In the canter half pass left the horse slightly increased the tempo. The two and one tempi's are Parzival's undisputed strong points. The pirouette right was ok, but the left one one was a bit slipshod in the exit. Cornelissen finished her ride on a high note with a super final centerline. 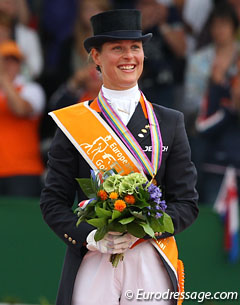 The home crowds went wild when Adelinde's score of 82.113% proved key for the gold medal. "Parzival was in top shape and I tried to screw it up, but that didn't work," said an almost speechless Adelinde at the press conference. The Nijkerk based rider praised her horse for this accomplishment. "I love it that he won. I'm so proud of him. Even though I made a mistake, he made it right. Afterwards I kicked myself real hard. During the test I had to ride double as good to make up for the points. The good score was ok. It's always afterwards that I feel so shitty. It could have been even better."

Adelinde's self-criticism at the press conference was swept off the table as everyone at the European Championships could see that her nerves of steel and total focus on her ride, without losing confidence when she makes a mistake, are what made her today's trye European Grand Prix Special champion.

"The last time I had a chance to win a medal was in 2005 in Hagen and I was third then but then they decided not to give a medal," Carl Hester said at the press conference. After that point in his career Carl actually thought he would "have to steal one" in order to get his individual medal one day. However, individual glory is no longer a uthopia for him as his namesake horse became the enabler of  perpetual glory today. 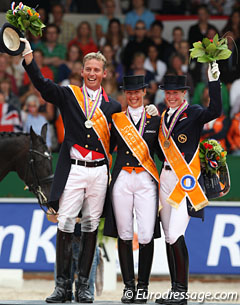 Aboard Sasha Stewart's 10-year old Dutch warmblood stallion Uthopia (by Metall x Inspekteur x Ulft) had all the cards in his hand to win gold if he was able to stay fault-free. For a long time he was in the lead on the score board and rightfully so. Carl and Uthopia are harmony pure and their lightness and naturalness are unparallelled. The trot extensions are so bouncy with suspension that lasts forever. The passage was regular and lightfooted with so much cadence, as if Uthopia were an elegant male ballerina. The walk still needs improvement. The black stallion has limited overtrack but showed good relaxation. In the first piaffe he slightly crept forward and made a difficult transition to passage but the second piaffe was more on the spot. The two-tempi's had improvement on straightness as Carl used the full diagonal to ride them.

But then it happened. Mistakes in the one tempi's made the score plummet below Adelinde's leading percentage. Carl lost his focus a bit and the pirouette right was a bit sloppy on the exit. He wanted to make up for points by riding the final extended trot for an 11 (and got 9.7 on average for it). The last centerline was lovely but his score stuck at 81.682% which still made him find the silver lining. 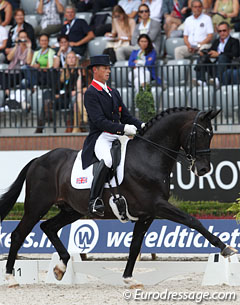 "He was completely focused. He made a couple of mistakes - of all the tests to do it in, it was just one of those things," Carl told British Dressage. "In the tempis he just lost a bit of rhythm. It’s absolutely amazing, I've never won an individual medal before and it just makes up for everything - it's the title I never had." At the press conference Carl said "I squeezed all out of him.  I counted wrongly in the one tempi's. I thought the horse performed the best he can for the level he is at at the moment."

The Rotterdam show arena is incredibly noisy with many people in VIP sections on three sides of the ring chit-chatting and being catered food without paying attention (and respect) to the action going on in the show ring. Furthermore background music tailor-made by Gunther Alberding has been louder than ever during the test and is sometimes more distracting than entertaining. Furthermore the crowd that is watching the test is very responsive when mistakes happen. " I didn't hear it. I'm older and deaf," Carl joked. "You do hear the audience. It doesn't add to your concentration when you make a mistake. The ooh went on for a bit longer with me." Cornelissen added, "you can hear the music in there, which is nice for tomorrow but not for today. When the rhythm doesn't quite fit it's not so nice."

For tomorrow's Kur to Music Hester seems quite unprepared, which will hopefully will not work to his disadvantage. "I have ridden my choreography only once," he admitted. "I've never ridden my freestyle for tomorrow. I've been watching the DVD five times today. My focus was to come here for the Grand Prix to win a team medal. I have to learn to enjoy riding the kur now. It's a new program I haven't ridden yet. You'll be surprised in the right way. Suppose it depends on where I hit my notes." 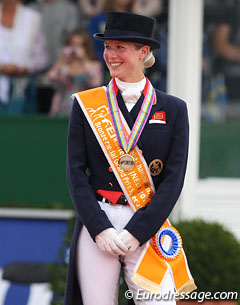 British Laura Bechtolsheimer added her second Grand Prix level bronze medal to her already impressive collection after she won triple silver at the 2011 World Equestrian Games and team silver and Grand Prix Special bronze at the 2009 European Championships. While Bechtolsheimer certainly was considered one of the gold medal hopefuls at this Championships the Brit has not (yet) been able to live up to the expectations. Her 16-year old Danish warmblood Mistral Hojris was flighty in the Grand Prix and seemed tired in the Special. An unusual string of mistakes gave her performance less shine than usual but the highlights made up for much as with 79.256%. Judge Roudier had her first with 84.167%, while Eisenhardt saw her in sixth place with 76.771%.

Laura B started out very strongly with much more relaxation and peace in the first part of her test. The horse was focused on her and responsive to her aids. He stood immobile at the halt at entry (first time this week) and the trot half passes were calm but ground covering. The passage showed amazing regularity and lightfootedness. The trot extensions were big and the extended walk was good. Even though the first piaffe started out quite well, Mistral lost his rhythm in the passage and made a mini-break into canter. At the strike off into canter he picked up the wrong lead. The canter half passes were well balanced, the two tempi's were big but Laura was half halting much to make them happen. Then there was a mistake in the one tempi's both on the diagonal and on the centerline. The pirouettes were good and the final centerline excellent. There was only very short immobility in the end halt.

"I was extremely happy with the first half of the test," Laura explained. "Until the extended walk I was having the best performance ever. He felt on the button. Today he was really nice in the hand again, but after the walk break he felt tired. I lost the impulsion he had at the beginning. When a big horse like that is not impulsive anymore I start making mistakes." Laura believes she might have slightly overworked her horse here in Rotterdam. "I kept taking him out to make sure he was relaxed," she pondered. "Should have, would have, could have. I'm still happy to be on the podium. Two Brits on the podium with an individual medal is still fantastic." 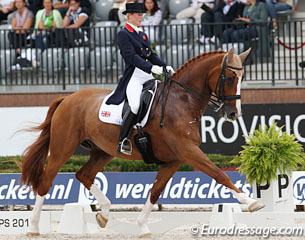 When asked how Laura will try to have a fresh Mistral by tomorrow, she answered that he'll be "well fed and get a good rest. Tomorrow we'll warm up less. I don't have to work him twice for quite so long. The atmosphere gives him a lift."

Judge at C, Australian Mary Seefried, was extremely pleased with the quality of riding in today's Special and to all the judges the form of the day decided the medallists. "Once we started judging it all panned out. My crew and I were thinking it was pretty wide open. There were such good riders and good horses. It all depended on how it went on the day. The winners speak for themselves."

With so many combinations peaking at this moment, the podium places in the Kur to Music will determined by the flawlessness of each rider's test as well as the quality of the music fitting to the horse's gaits. Sunday is expected to be as heart-moving as the Special was today.