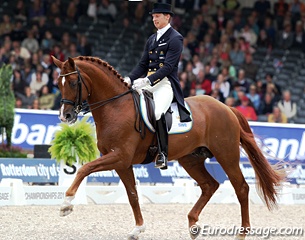 Sweden, Spain and Denmark qualified for the London 2012 Olympic Games as a result of their placings in yesterday's 2011 European Dressage Championships team competition. Sweden finished fourth on a score of 214.437%, Spain was fifth (211.580%), and Denmark sixth (209.985%).

The three leading nations at the Championships had already achieved Olympic qualification. Gold medallists Great Britain are automatically qualified as next year’s Olympic Games’ host nation. The silver medallists from Germany and the bronze medallists from The Netherlands had previously secured their spots at last year's World Equestrian Games™ in Kentucky.

This brings the number of teams qualified to date for London 2012 to seven: Great Britain, Germany, The Netherlands, USA (who qualified at the Alltech FEI World Equestrian Games™ in Kentucky), Sweden, Spain and Denmark.

The next event for direct team qualification is the Pan American Games to be held in Guadalajara (MEX) from 14 to 29 October. The two best placed teams from Olympic Groups D (North America) and E (Central and South America), excluding the USA, will secure participation in London.

The Pan American Games will be followed by the two FEI-approved qualification events which will take place in Sydney (AUS) on 28 October and Ermelo (NED) on 2 November which are open to teams from the Olympic Groups F (Africa and Middle East) and G (South East Asia and Oceania). Combined standings from both competitions will be produced and the two best ranked teams, excluding the teams listed above, will qualify for London 2012.

Eleven nations qualify directly for the 2012 Olympic Dressage competition through team competitions at FEI Championships, with a team consisting of three athletes and three horses. However, the total number of nations participating in the team competition in London may exceed 11 since additional composite teams made up of three individuals from the same nation may qualify through the FEI Olympic Athletes Rankings.

The complete qualification procedure for the Dressage competitions at the 2012 Olympic Games is available here.