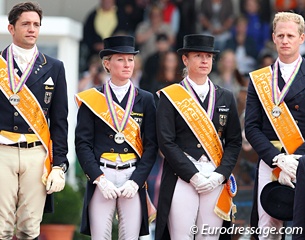 With the British team in an untouchable golden position in the nations' cup at the 2011 European Dressage Championships, the silver and bronze medal were disputed by the world's two biggest dressage nations: Germany and The Netherlands. Keeping the 2010 World Equestrian Games team championships in retrospect, in Rotterdam Germany rose to silver medal position while Holland dropped to bronze on home turf.

With the acquisition of Totilas for the German "Mannschaft" the Dutch lost their pivot and the Germans believed that they would freewheel to team gold with the assisted strength of young shooting stars such as El Santo NRW, Donnperignon, Damon Hill (and Dablino). However during the 2011 outdoor show season this spring the Brits made magic happen in the show ring, like genies out of a bottle, and Germany was again confronted by a new remarkable rival that would not be easily swept of the board.

Germany Moves Back up the Ladder

In the nations' cup Grand Prix at the 2011 European Dressage Championships Great Britain won historic gold with a team world record score of 238.678 points, while Germany ended up with silver on 226.110 points and Holland with bronze on 222.645 points. 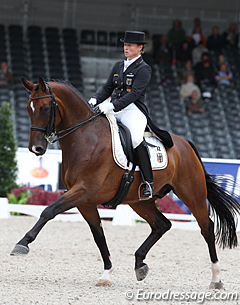 On the first day of competition on Wednesday Germans Helen Langehanenberg and Christoph Koschel slightly disappointed with mistakes in their ride. Isabell Werth and her relatively young Grand Prix horse El Santo NRW (by Ehrentusch x Rhythmus) were the first Germans to go on Thursday and had to make up much if they wanted to end up on the podium. Unfortunately the pair could not achieve the inflated marks they got, for instance, at the 2011 German Dressage Championships (79.574% GP, 81.375% GPS). Isabell scored 75.213% to finish seventh.

The very sympathetic bay gelding is still a "work in progress" young Grand Prix horse. While Werth is a true master at riding accurate tests and showed glorious highlights such as the zig zag and stunning pirouettes, the piaffe work is very novice and the chunky bay loses all impulsion and expression in the movement. Werth started her test with a halt that was not immobile. The trot half passes were huge but do not yet show the self-carriage that Satchmo had in his trademark movement. The trot extensions were fantastic and the transition to passage phenomenal in its smoothness. The extended walk was lovely -- active, relaxed ground covering strides -- but in the collected walk the gelding verges on pacing. The two tempi's were big, the canter extension uphill but not straight in the body. The one tempi's lost their uphill tendency. Overall the strongpoints of El Santo's test were of such a high level that they pulled up the score, but overall this horse needs to be more closed in the frame.

"I am unhappy with my piaffes and the rest was really good without big mistakes," Werth commented on her ride. "The piaffes have to become better again. He was super in the warming up and really super in prize giving. I just had to press the button. I hope I can take that feeling to Saturday." Isabell stated that she'll add extra coal to the fire for the Grand Prix Special on Saturday. 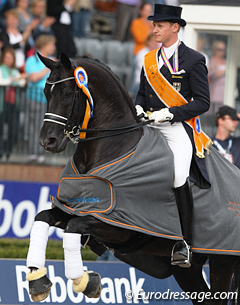 All German hope and pressure lay on Matthias Rath and Totilas' shoulders to lift the team score to greater heights. The celebrated and media hyped pair finished third behind Hester and Cornelissen with a 79.453% score. The dynamic duo was not yet on greatest form as small mistakes and imperfections meddled with the ride.

As usual the halt was totally behind the vertical, yet square. The half pass right was fantastic but the horse was tight in the neck, the one to the left was a bit less supple. The first and second trot extension hardly had any overtrack. The first passage was gorgeous with amazing lift and the piaffe was excellently on the spot though Totilas bopped his head. The extended walk had plenty of overtrack and the collected was really nice in rhythm. The second piaffe was brilliant in expression but the horse became deep and in passage Totilas lifted his knees to the chin but was totally behind the vertical. The black stallion has a fantastic, springy canter but he became constricted and tight in the frame. While Rath clearly improved the ground cover in the tempi changes, like Gal the German has problems to keep his horse straight in the two's and he only made 13 one tempi's instead of 15. The pirouettes were very small but Totilas almost rotated on his hind legs instead of making pronounced jumps. The final extended trot was probably the best one of the three with reasonable overtrack. The final centerline looked very promising but right before the halt the horse broke into canter.

"I didn't miscount in the one tempi's, because I had given the aids but I should have given them a bit stronger," said Rath after his test.  "I really wanted to give it our all at the end of the test," he added about the break into canter. German chef d'equipe Holger Schmezer commented that "Matthias had a super ride. You notice that the more experience they both get, the more risk they take." 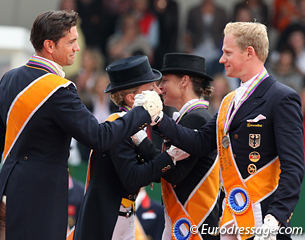 When asked if Matthias felt particular pressure riding Totilas in The Netherlands for the first time, Rath replied, "the pressure was there from the beginning. These are my first championships with Totilas. He's always trying his best and not to do any mistakes. He is really good for his rider. It is lots of fun to work with him every day."

The Germans were extremely happy with silver and realistic in their inabiity for more at this year's championships. "We're not surprised to be honest," said Isabell Werth, the self-proclaimed "mum of the team" amongst all those young riders. "We were not that in form before and expected the Brits to be strong. We were hoping not so strong. We were not as strong as we could be. All combinations made mistake, some unforced errors as you would say in tennis. We have to develop to come closer to being a stronger competitor to this British team." Rath aded that "last time we got bronze, this time silver. When this upward tendency continues, we're on the right way."

Homeside Heroes End up with Bronze

The Dutch home team finished with bronze with a score 3,4% behind Germany and 8,2% comfortably ahead of the fourth placed Swedish team. Holland's sovereign reign the past three years has officially come to a decline with the advent of Britain's star pairs and Totilas switching camps. The balance is now filled with riders who celebrate harmony, lightness and naturalness in one pan and those who go for expression and sparkle in the other. 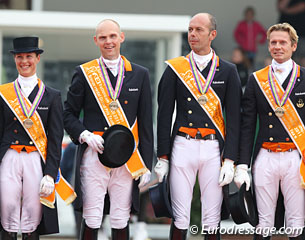 The only non-disputable fact that has remained unaltered is that the Dutch warmblood society is currently dominating world dressage breeding with four KWPN bred horses ranking in the top four of the Grand Prix. Four of the five horses have Ulft in their pedigree. Interestingly Totilas is half Trakehner and fifth placed Danish warmblood Mistral Hojris is by Dutch bred Michellino (by Trakehner Michelangelo out of an Ulft dam).

Holland's number one Adelinde Cornelissen was last rider to go on Thursday and had to interrupt her warm up when a thunderstorm hit the Rotterdam show grounds and lightning struck the electricity network and made one of the score boards explode. The added 45 minute break did not have much effect on Parzival's performance as the long legged, super elastic and fantasticly moving chestnut gelding was on great form.

Cornelissen made a very good stab at getting the high score in the Grand Prix, but a big mistake in the zig zag kept her from the victory. The halt at entry was tight in front but square. The half passes were massive in ground cover but the horse had his mouth wide open in this movement, as well as in all three huge extended trots. The rein back was outstanding. The rhythm in the first piaffe-passage was excellent and Parzival stayed on the spot and regular in the piaffe. The extended walk was lovely with much overtrack and in the collected walk the horse was clear in his 4-beat but could have been more collected. The second piaffe-passage was immaculate in rhythm but Parzival should sit more in piaffe as he remains horizontal in the topline. In the zig zag the mistake was bound to happen as Cornelissen lost control over the balance and one of the flying changes did not come through. The one and two tempi's were fantastic and both pirouettes were high class. 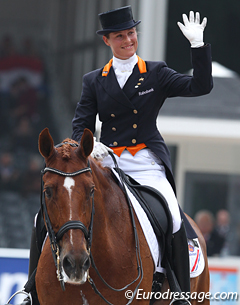 Young Adelinde had a very strong ride but should be much more delicate in her half halts. Her powerful final line aided her in achieving a 81.155% score and a second place. The judges did not all agree on how to mark this ride. Eisenhardt had her at 78.723% while Roudier was 7,447% higher with his 86.170%.

"I'm very happy. He did really well, considering the fact that I had to walk half an hour in the indoor arena during thunder and lightning. He picked it up well again," Cornelissen commented after her test. Adelinde was unphased by the unforeseen weather break. "It's something you have to cope with. You have to stay concentrated and focused. You plan your warm up without half an hour of walk in it of course."

The second Dutch rider of the day was Edward Gal on Emmy de Jeu's Dutch warmblood mare Sisther de Jeu (by Gribaldi x Amor). The temperamental bay mare is always a hot mama and that showed because there was barely a halt at the beginning of the test. Sisther has a very active trot but tilted to the right in the first extension. The half pass left was beautiful and the rein back good. The hind legs should move more under the body in passage but the piaffe was expressive and off the ground. Gal was able to ride a nicely controlled extended walk with good overtrack. Sisther had a funky twitch with her right hind leg, over-reacting in a few steps in the first piaffe and second passage as well as before the canter strike-off. The two tempi's were big, but lacked straightness in the body. Twice in the one tempi's she didn't change behind. The zig zag was good and in the pirouettes the mare took the weight well on her hindquarters. The contact became heaver towards the end of the test as the mare got more tense. On the final centerline she was totally crooked in the body in the first passage and piaffe at X. 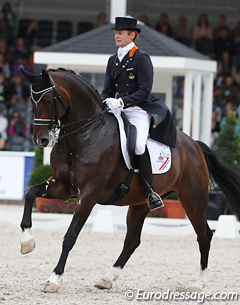 Gal finished 17th with 70.517%. "In the warm up I won," he joked. "It was really nice, but then I came in the ring and it was gone. Suddenly she gets tense, and then okay, it's over. She did really good things but I had too much tension," he admitted.

With Adelinde's 81.155%, Minderhoud's 70.912% and Marijnissen's 70.578%, the Netherlands got bronze. "I think we all did a great job and are pretty happy being third, I guess," Cornelissen commented at the press conference. "We would have loved to get higher up, but need to be reasonable. We knew gold was given to the British beforehand."

Judge at C Wojciech Markowski (POl) was thrilled with the quality of riding shown in the Grand Prix. "On behalf my colleagues I can say that this is one of the best championships," he said. "I have never seen such good horses at the top. The next days will be more exciting."