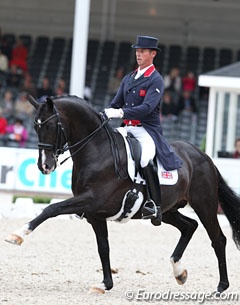 Carl Hester and Sasha Stewart's Dutch warmblood stallion Uthopia showed they had swagger in the morning session on the second Grand Prix day at the 2011 European Dressage Championships in Rotterdam, The Netherlands. With a mind-blowing ride, in which the black stallion scored seven 10s for the final extended trot, Hester achieved his personal best score of 82.568% and is currently in the lead.

Great Britain is just untouchable here at the European Championships. With Charlotte Dujardin's 78.830% score and Carl's 82.568% the biggest pressure is off Laura Bechtolsheimer's shoulders as the British team is so comfortably on first place that a bomb needs to explode in the arena to keep Britain from gold. They now have a team score of 231.824 points 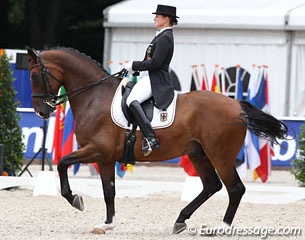 The German team is currently in second place (217.736 pts) as Isabell Werth gave a big boost to the team result after achieving a generous 75.213% for her ride on El Santo NRW (by Ehrentusch). The bay struggled with all the piaffes, failing in impulsion, but executed probably one of the best zig zags and pirouettes of the day.

The Danish team score has not really changed (206.262) either as Sune Hansen and Blue Hors Stud's Oldenburg stallion Romanov (by Rohdiamant x Grundstein II) were unable to exceed Lisbet Seierskilde's mark. The gorgeous dark bay stallion had problems with the tempi changes but showed beautiful half passes and very nice piaffes. He got 67.660%. 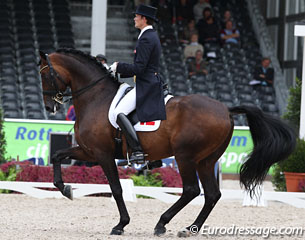 The Swedish team is now fourth so far with 204.726 points. Tinne Vilhelmson and her charming chestnut gelding Favourit (by Fidermark x Worldchamp) achieved 69.939%. The piaffes continue to be an issue for them with the Rhinelander almost rearing in the second piaffe, but the tempi changes were lovely and Vilhelmson is such a master in remaining quiet, soft and elegant in the saddle.

The third and fourth Dutch rider still have to go in the afternoon, so the Dutch team score is unaltered.