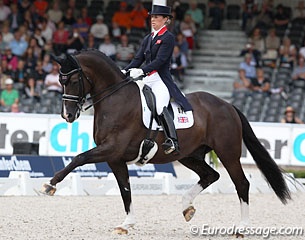 With the morning session of the first half of the Grand Prix nations' competition at the 2011 European Dressage Championships behind us, Great Britain made a smashing impression as Charlotte Dujardin swept the board by scoring 78.830%. The 26-year old newcomer on the British team took the lead after a dashing and faultfree ride aboard Carl Hester and Roly Luard's Dutch warmblood Valegro (by Negro).

The British team are certainly on excellent form as their second team rider of the day, Emile Faurie with Joanne Vaughan's Danish warmblood Elmegardens Marquis, lived up to the expectations and put in a solid ride without dropping on his current scoring level. His 70.426% score, combined with Charlotte's whopping 78.830%, has put Great Britain in a strong lead so far. "I am just totally and utterly over the moon and thrilled," Emile commented after his test. "Max is just an awesome horse with more in there."

The German team is currently in second place in the nations' cup ranking, but their two riders of the day both dropped the ball and scored below par. Helen Langehanenberg dealt with a dull Damon Hill, who tried his best but just couldn't achieve that desired solidity. Too many irregularities in the tempo and mistakes in the one tempi's pushed her score down to 71.079% while she usually gets 74-75%. 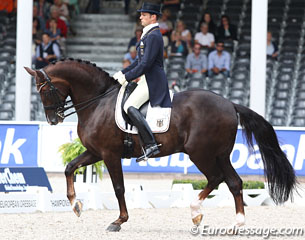 Christoph Koschel and his Finnish warmblood Donnperignon are normally also mid 70 percentage scorers, but they were just a little bit too conservative. While "Pepe" showed a beautiful sitting piaffe outside the arena, during the test he lost his stride and the piaffes were rhythmical but small. In canter, Koschel struggled a bit when entering the diagonal for the one tempi's. He putt his horse behind the vertical and short in the neck which automatically resulted in the changes not coming through. The passage was brilliant as usual and thanks to powerful extended trot and canter work, Christoph was able to keep the score at a 71.444%, which places him second so far.

The Danish team is currently in third place with new comer Lisbet Seierskilde and her home bred Jonstrupgaardens Raneur clearly proving why she earned that spot on the team. Her solid round, which made her put 69.970% on the score board, outclassed the ride of long time Danish team member Anne van Olst on Clearwater. 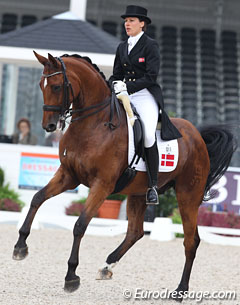 The Dutch based Dane just rode her horse literally with the hand brake on and had him too collected and restrained in the test. The one tempi's seem to be the stumbling block of the day as also Van Olst failed to execute them faultfree. She scored 68.632%

The Dutch team are currently in fourth place but that will change soon as only one of their riders have competed so far. Sander Marijnissen and his 17-year old chestnut KWPN gelding Moedwil (by Goodwill) also had their team debut in Rotterdam and deserved the pat on the back for their clear round. Some minor imperfections, such as big pirouettes and a passage which lacked decent strength from behind, kept the score at 70.578%. Second Dutch team rider of the day is Hans Peter Minderhoud. If he is able to give it his all he might enable Holland to move into silver medal position, which is probably more than they expected as the Dutch seemed to have been aiming for bronze.

More to come this afternoon. Check out the live scores here.