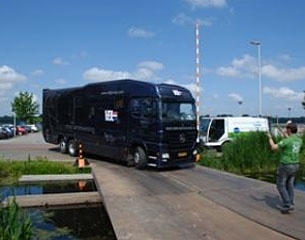 On Saturday morning the first horses arrived on the show grounds for the 2011 European Dressage Championships in Rotterdam, which are ready to kick off on Wednesday 17 August 2011. The Austrian team were the first to arrive, however without team member Karina Prochasha who withdrew from participation last Wednesday.

Prochaska and Dow Jones will not be competing for Austria, which means that the Austrian team will only consist of 3 pairs and has no scratch score. The other team members are Peter Gmoser with Cointreau, Renate Vogelsang with Fabriano and Victory Max-Theurer with Augustin OLD. The latter recently recovered from a lung embolism and had to withdraw from Aachen. The young Austrian champion is fit and healthy again and expressed that she hopes to finish in the top 10 with her home bred dark bay stallion (by August der Starke x Rohdiamant). The Austrian team is accompanied by chef d'Equipe Thomas Lang.

"We're a small but good team," said Lang. "Vici and Augustin are world class, no question about it. Peter and Cointreau proved like at the WEG in Kentucky, that they are able to putting down top performances and I see much potential in Renate and her temperamental stallion Fabriano."

Sixty-three more horses will be traveling to Rotterdam for the Europeans. They are expected to arrive later this weekend and on Monday.
The Dutch team had two days of training sessions with team trainer Sjef Janssen and future Judging Supervisory Panel member Jan Peeters during the week, while the German team held a training camp at Hof Kasselmann/Hof Beckerode in Hagen, Germany before making the journey to The Netherlands.

Canadian Ashley Holzer, whose is training with Pop Art at Anky van Grunsven's yard in Holland, will be the guinea pig for the Grand Prix on Wednesday and Special on Saturday. The score of the guinea pig does not count but it's opportunity for the judges to warm up and test if all the scoring computers are working.