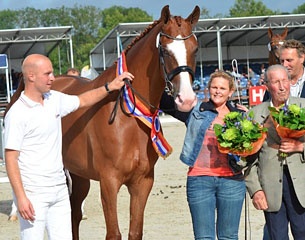 Dutch warmblood breeder Huub van Helvoirt continues to fly high as yet another one of his breeding products has claimed highest honours at a KWPN breed show. His 3-year old chestnut mare D.Obertje was proclaimed 2011 KWPN Mare Champion of the Year at the 2011 KWPN Paardendagen in Ermelo, The Netherlands, on Friday 12 August 2011.

The chestnut D.Obertje (by San Remo out of O.Bertje (by Contango)) was the judges' and crowds' favourite and received applause for each presentation. "This three-year old mare convinced us with her strong medal and extra movements," said judge Ine van Deurzen. "D.Obertje has a strong topline and a fantastic walk. She's the deserved champion."

Van Helvoirt, who bred licensed stallions Jazz, Zuidenwind, Zhivago, and Tango as well as Grand Prix mare Sisther de Jeu, was ecstatic with his mare's victory. "This is really fantastic," said the moved Huub, who was proclaimed KWPN Breeder of the Year in 2005.

Tim Coomans' Dolly (by Ziesto x Osmium) was proclaimed reserve champion at this year's national mare championship. The 3-year old excelled with her self carriage and powerful gaits.

Djuice Geuzenhof (by Jazz x Fruhling) finished third. She is bred by Sandra Maakenschijn from Chaam, The Netherlands. This mare stood out with her balanced conformation. Though Djuice could have had more expression in the forehand, she moved with much elasticity and roundness and has a very nice walk.