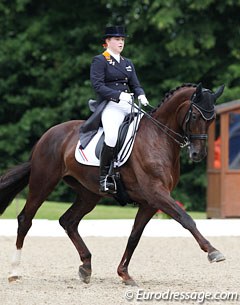 Williams acquired the Hanoverian mare (by Florestan x Akzent II) without even trying her. "They bought her unlooked at," said Antoinette's father Noud te Riele. "The Williams family has had such good experience with us. Tirst they got Danny Boy and then Dynasty last year, which Antoinette rode for the Rothenberger family. They just went for it without a doubt."

Sven Rothenberger discovered Fleurie in Sweden for his own daughter Sanneke, but sold her to the late Adri Gordijn, grand father of Antoinette and Sven's father-in-law. With the dark bay mare Antoinette won team bronze at the 2011 European Junior Riders Championships in Broholm, Denmark, and finished sixth in the Kur to Music Finals.

"Antoinette will now be riding her grandma's 3-year old and we'll look for a new junior/young rider's horse for her. For Antoinette it was a highlight that she made a successful transition from ponies to horses in such a short period. We never expected this," said Noud.

The 14-year old Erin Williams is a British pony team member and was a finalist at the 2011 European Pony Championships in Jaszkowo, Poland.