Talking Frankly with Frank Kemperman on the 2011 European Championships 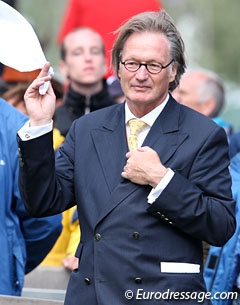 In the countdown to the FEI European Dressage Championships 2011 at Rotterdam (NED), FEI Dressage Committee Chair, Frank Kemperman, talks about his expectations for the event and the challenges facing the sport.

A record number of riders from 21 nations have confirmed participation in this year's European Dressage Championships. Can you explain the reasons for the growth in numbers?
FK: The sport of Dressage is growing all across Europe - public interest is enormous, even in countries that don't, traditionally, have a strong historical connection with the sport. The sport is more interesting these days - we don't constantly have the same winners because now we have several countries with riders who can challenge for the various titles. And we are very happy to have "stars" in our sport. Previously it was Isabell (Werth) and Anky (Van Grunsven) who each had their own fan clubs. But now we see new names up there in lights, and something I'm delighted about is that the world now understands that the real "stars" are the horses. We have seen what a horse like Totilas can do for the sport - it's amazing!

This will be the first European Championship at which the FEI Judges Supervisory Panel (JSP) will officiate. Can you explain the work of the Panel, and the reasons for its establishment?
FK: After the Olympic Games in Hong Kong the discussion about the quality of judging came up again. The Task Force has looked at the situation and examined the way things are done in other sports. We realised that a panel with the power to correct the judges could be useful. We have made a much wider package of tasks for the JSP, and in Rotterdam it will function for only the second time. It first came into operation at the Reem Acra FEI World CupTM Dressage 2011 Final in Leipzig last May, and we hope it will again provide a supporting function for the judges. And with the system of seven of the top judges in the world backed up by the JSP, I don't believe there will be any discussion about judging after these Championships.
From an FEI perspective, both the education and training of judges at all levels is considered another very important task. We have many good judges, but they need coaching just like everyone else.

What are the greatest challenges facing the sport of Dressage today?
FK: Planning for the future is the greatest challenge of all. We need to understand what the public of tomorrow expect from Dressage. We want exciting sport and attractive competitions - attractive for everyone, the riders, spectators, sponsors and the media. And we must never forget the welfare of the horse. It is up to the Dressage community to be open to the concept of change in the interest of taking the sport forward into the future.

Where do you see the sport of Dressage in five years time?
FK: I expect that the sport will grow, and that more and more countries will have riders competing at the top level. We need to capitalise on the growing interest in Dressage today and use that interest to create more awareness of the sport, and what it has to offer.

The FEI European Dressage Championships 2011 is a qualifying event for the 2012 Olympic Games. What are your expectations for next year's Olympics in London?
FK: We are all looking forward to London 2012. Great Britain is a horse-country and it is good to see that the British Dressage team is now one of the teams with medal chances. That will create "Dressage-fever" in England! Olympic medals are vitally important to any country, and the British are serious contenders. This is good for the sport in general, and many young riders will hopefully get interested in Dressage because of what they see at the London Olympic Games.

Fans of equestrian sport took the partnership of Edward Gal and Moorlands Totilas to their hearts following their sensational and record-breaking performances at the FEI European Dressage Championships in Windsor two years ago. Will the new partnership of Matthias Alexander Rath and Totilas be 2011 champions?
FK: Equestrian is a sport where the harmony between rider and horse is very important. Edward and Totilas created a lot of goodwill for Dressage. Let ?s hope that the combinations we see in the arena in Rotterdam, new ones and more familiar ones, can create as much excitement and provide us with even more wonderful publicity for our great sport. There are so many great horses out there and I’m looking forward to seeing them all in action next week.