It's a Silver Anniversary for the European Championships, But Who Will Take the Gold? 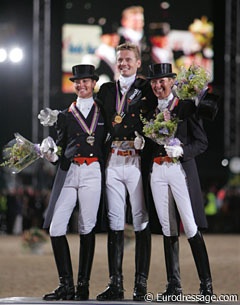 The 2011 European Dressage Championships will celebrate 25 years of spectacular sport as the action gets underway at the Kralingse Bos arena in Rotterdam (NED) next Wednesday morning.  The world of Dressage has undergone significant change since Switzerland's Henri Chammartin and Wolfdietrich won the first Individual title in Copenhagen (DEN) IN 1963

, and while only 16 riders from eight nations lined out in that inaugural fixture, participation is at an all-time high this time around with 66 competitors from 21 nations and a total of 16 teams vying for the coveted medals.

Austria, Belgium, Denmark, Spain, Estonia, Finland, France, Great Britain, Germany, Hungary, Ireland, Italy, Luxembourg, The Netherlands, Norway, Poland, Portugal, Russia, Switzerland, Sweden and the Ukraine will all be represented in what promises to be an epic battle over four tough days of competition beginning on 17 August.

The European Dressage Championships, as we know them today, emerged from the FEI Grand Prix events that date right back to 1927 and which became increasingly competitive throughout the 1950's.  The winners were often referred to as European Champions, so it came as no surprise when Chammartin, FEI Grand Prix champion in 1955, 1958 and again in 1959, claimed gold at the first official FEI European Dressage Championship four years later. In fact he was a double-medallist in 1963, also taking bronze with his second ride Woerman while Germany's Harry Boldt and Remus finished in silver-medal position.

Two years further on, in 1965, the first Team Championship took place in which the three Dressage powers of the time - Germany, Switzerland and the Soviet Union - finished in that order while Chammartin won his second Individual title.  The great Swiss rider, who recently passed away at the age of 92, also competed in five consecutive Olympic Games between 1952 and 1968 and collected five Olympic medals including gold in Tokyo in 1964.

Once the Germans got a taste for success at team level, there was no stopping them for the next 40 years as they scooped 21 team titles in a row.  And although Switzerland's Christine Stuckelberger (in 1975 and 1977 with Granat), Austria's Elisabeth Theurer (in 1979 with Mon Cherie), Denmark's Anne-Grethe Jensen (in 1983 with Marzog), Margit Otto Crepin from France (Corlandus in 1987) and The Netherlands' Anky Van Grunsven (in 1999 with Bonfire) claimed individual gold during that time, Germany also cleaned up the majority of the Individual titles - 15 in total between 1963 and 2003.

The German title-holders included legendary triple-champion Reiner Klimke and double-champion Liselott Linsenhoff.  In 1991 at Donaueschingen (GER), two separate Individual competitions were staged for the first time and Germany won both - Sven Rothenberger and Andiamo coming out on top in the Kur to Music and Isabell Werth topping the Grand Prix Special. The same format was used in Lipica (SLO) two years later when Werth came out ahead again, and 1989 champion Nicole Uphoff secured the German double by winning the Kur.

There was a change to the format in 1995 at Mondorf in Luxembourg where all riders competed in the Grand Prix, the top-24 went through to the Grand Prix Special and the top 12 qualified for the Kur, or Freestyle.  The scores from all three competitions decided the Individual champion, and there was no doubt about the result as Werth and Gigolo won all before them.

DOGGED AT EVERY TURN

The German star was being dogged at every turn however by a Dutch rider called Anky van Grunsven who, riding Bonfire, took silver behind Werth in 1995 and 1997 before clinching Individual gold at Arnhem (NED) in 1999.  The winds of change were blowing, and although Salzgeber and Rusty reigned supreme for Germany during the next two Championships, Van Grunsven and Salinero took the Individual title again at Hagen (GER) in 2005 where the Dutch finished a close second in the Team Championship.

Since then, the The Netherlands has not looked back.  Following the re-introduction of the two-medal Individual formula, Werth claimed gold in the Grand Prix Special at La Mandria (ITA) in 2007, but Van Grunsven won the Kur to Music and the Dutch team overcame Germany for the very first time.  Two years ago in Windsor (GBR), Dutch supremacy was further cemented when Adelinde Cornelissen and Parzival claimed the honours in the Grand Prix Special, Edward Gal and the spectacular Moorlands Totilas produced a record-breaking 90.750% to win the Freestyle and the team of Cornelissen, Gal, Imke Schellekens-Bartels and Anky Van Grunsven won gold.

There are lots of big questions ahead of next week's 2011 Championships including - can the Germans return to a position of prominence, or will the Dutch continue their winning streak? And how about the British who took silver at last year's World Equestrian Games™ in Kentucky? The heart-stopping stallion, Totilas, is now in the hands of Germany's Matthias Alexander Rath and the partnership is going from strength to strength.  Can this horse set the world of international dressage alight once again, as he did so sensationally at Windsor two years ago?  The German team is truly formidable, with the on-form Helen Langehanenberg and Damon Hill NRW joined by Christoph Koschel (Donnperignon) and multiple-champion Isabel Werth, this time riding El Santo NRW.  It is a side oozing experience and talent, and will surely be a tough nut to crack.

But the Dutch have 2011 World Cup™ Dressage champions Cornelissen and Parzival, Gal with Sisther de Jeu, Hans Peter Minderhoud with Exquis Nadine and Sander Marjinissen and Moedwill on call-up.  It has taken The Netherlands a long time to establish themselves at the top of the world order, and they have no intention of yielding that position, especially not on their home turf.  The British meanwhile are determined to hold their ground, and if Laura Bechtolsheimer and Mistral Hojris can re-produce the form that gave them silver in both the Grand Prix Special and Freestyle in Kentucky last October, and Carl Hester continues his meteoric rise with the stallion Uthopia, then the British side that also includes Charlotte du Jardin (Valegro) and Emile Faurie (Eimegardens Marquis) will be serious contenders.

There will, no doubt, be some surprises along the way, but one thing is for sure - the FEI European Dressage Championships 2011 promise the best of top-quality sport.  Don't miss a beat - complete competition reports, results, updates, behind-the-scenes information, fact and figures and more can be found on www.fei.org as well as dedicated FEI Facebook, Twitter and YouTube pages.  Join us for the ride....

This is the 25th edition of the FEI Championships and only the second time for the event to take place in The Netherlands.
The venue at Kralingse Bos, a 200 hectare forest located in the heart of Rotterdam, has been home to the world-famous CHIO Rotterdam since 1948.
Germany has won the FEI European Dressage Team Title on 21 occasions, undefeated between 1965 and 2005.
The defending team champions are the Dutch, winners at the 2009 Championships in Windsor (GBR) and also at the previous Championships at La Mandria (ITA) in 2007.
Dutch riders are also the current title holders in both the Freestyle to Music (Edward Gal and Moorlands Totilas) and Grand Prix Special (Adelinde Cornelissen and Parzival).
The three best ranked teams from the FEI Olympic Groups A (North Western Europe), B (South Western Europe) and C (Central Europe) will qualify for the 2012 Olympic Games, excluding Great Britain, The Netherlands, German and the USA who are already qualified.
A record number of 16 teams will compete at the 2011 Championships in Rotterdam (NED).  Previously the largest number of competing nations was 14 - at Hickstead (GBR) in 2003 and again at Hagen (GER) in 2005.
The legendary Dr Reiner Klimke won three individual titles - at Aachen in 1967 riding Dux and again in 1973 riding Mehmed.  His third victory was in Copenhagen                                                                                  (DEN) in 1985, partnering Ahlerich.
At the FEI European Championships in Windsor (GBR) In 2009, The Netherlands' Edward Gal and Moorlands Totilas smashed the Freestyle world record with a mark of 90.70%, achieving a spectacular 29 perfect-10 scores.
President of the Ground Jury for the FEI European Dressage Championships 2011 at Rotterdam (NED) is Gislain Fouarge (NED) who has officiated at the 2008 Olympic Games in Hong Kong, the FEI World Equestrian Games™ 2006 in Aachen (GER), the Alltech FEI World Equestrian Games™ 2010 in Kentucky (USA) and at two World Cup™ Finals.  Mr Fouarge was elected the FEI's first Dressage Judge General in January 2011.