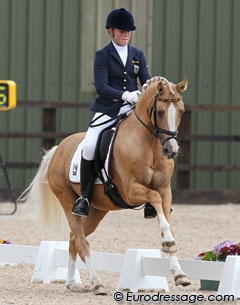 Nadine Krause has been chosen as the new rider of Jessica Krieg's 8-year old palomino stallion Danilo (by Dornik B x Power Boy). The stallion is bred and owned by Werner Steinheuer from Marl-Polsum, Germany.

Danilo's new rider is Nadine Krause, a cousin of German pony rider Semmieke Rothenberger. The Bad Homburg based Krause will get the ride on the palomino as of September 2011 and Stefanie Meyer-Biss will remain to be the pony's trainer.