The Best of the Rest in the 5-year old Finals 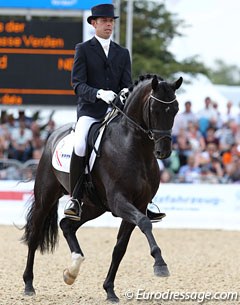 The 5-year old finals at the 2011 World Young Horse Championships in Verden was amazing. It has been years that the quality of horses was so high. Three horses might have unrightfully belonged in the final field of fifteen, but overall it was a neck-to-neck competition with only the mares, Woodlander Farouche and Damon's Divene, standing out as a league of their own.

The top ranked horses were all very special in their own kind but some of them were even a little bit more exciting than others. The fourth ranked horse in the 5-year old final was certainly one that made your heart beat faster. Hans Peter Minderhoud rode the Nekeman family's Boston, a dark bay stallion by Johnson x Quattro B, to an 8.74 score. The small but powerful stallion has an amazing hindleg: super active, quick and always engaged. The horse is extremely elastic and lightfooted and painted a beautiful picture in trot. He scored 9.3 for that gait, the second highest score of the day. The walk was solid but the turn on the haunches too big. The canter was fantastic. Always uphill and powerful, Boston executed fantastic extensions, but lacked some self carriage in the counter canter. The biggest issue in Minderhoud's test was the contact with the bit. The horse constantly nodded his head and was very unsteady at the vertical. When he was given the reins at the end of the test, the horse curled up instead of stretching the neck.

Boston scored 9.3 for trot, 8.2 for walk, 9.0 for canter, 8.3 on submission and 8.9 for general impression. With a total of 8.74 he finished just outside a medal position but captured the hearts of the crowds. When asked if Hans Peter didn't think he was too tall for this horse, he joked, "yes you're right, but he's just too good a horse to give to someone else." The rider can not hide his enthusiasm for this little movement machine. "Boston is a fantastic horse. He's beautiful and moves very well. Today I was able to ride him very nicely and the relaxation in the walk was an enormous improvement compared to the first day. I was very happy." 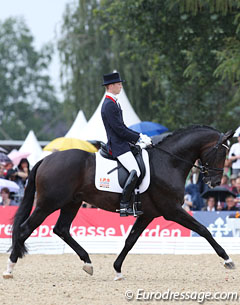 Belgian Tom Franckx-Goen couldn't believe his luck when he finished third in the preliminary test aboard the IPS owned Dutch stallion Bon Bravour (by Painted Black x Chronos). "I was so nervous. Two hours before the test I had to go lie down in the caravan," he admitted. Franckx-Goen is trained by Jeannette Haazen but he has also sought help from Jacqueline Fiechter and Anky van Grunsven (through the IPS affiliation) for the coaching of Bon Bravour.

In the finals the Belgian rode his impressive dark bay stallion with much finesse. Bon Bravour has a lovely, ground covering trot with much lift in the shoulder. He is super elastic, had good bending on the curved lines but could have been quicker in the hind legs. The tempo of the trot had to be more regular as Bon Bravour tends to take uneven steps as soon as he has to shorten the pace. The extensions were nice, but there was certainly more in his tank. In canter the horse showed very nice simple changes, but there was some loss of balance in the counter canter as the horse had to be more closed in the frame. Franckx-Goen and Bon Bravour probably showed one of the best halts at entry and at the end.

Bon Bravour scored 8.7 for trot, 8.9 for walk, 8.8 for canter, 8.2 for submission and 8.6 for general impression. The total of 8.64 put them fifth and made them the best performing Belgian pair ever. In 2004 Vicky Smits finished sixth with Daianira van de Helle on a score of 8.46.

Dorothee Schneider and Gabriele Kippert's Hanoverian gelding Showtime (by Sandro Hit x Rotspon) were sixth with 8.58. The trot work flowed. There never was a single hesitation in the tempo nor in the transitions and the balance was at all times impeccable. The walk was decent, the walk pirouette perfect. In canter the horse could have shown some more elasticity in the body and legs but he continued to display extraordinary rideability. Only in counter canter the horse lost some uphill tendency and balance, but the final giving and taking of the reins in trot was gorgeous. 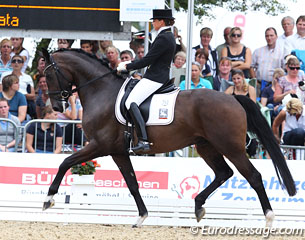 The judges called Showtime a "top class dressage horse with a lot of presence" and scored it 9.0 for trot, 8.2 for walk, 8.7 for canter and 8.7 for general impression. It was mind boggling that this combination only got 8.3 for submission with as indicated reason "he was sometimes tight" while this horse showed a brilliant test, fantastic rideability and the best walk pirouette of all horses.

It was puzzling that the walk pirouette -- which is probably the most difficult movement in the 5-year old finals test as it assesses a transition from trot to walk, the clarity of the walk, the pirouette itself and then a transition back to trot -- was never publicly taken into consideration when the judges reviewed the ride for the audience. In case of Emmelie Scholtens' Borencio, it was staggering to hear Mariette Sanders-Van Gansenwinkel tell the crowds that "this horse made no mistakes" while the bay Dutch warmblood completely blocked in the turn on the haunches. At the press conference, Loriston-Clarke explained that the judges did take the walk pirouette into consideration in their notes, but just didn't mention it in their review of each horse after the each ride.

French Jessica Michel and Xavier Marie's Hanoverian stallion Swing de Hus (by San Remo x Wonderland) placed seventh with 8.48. The elegantly moving black stallion got a bit stuck in his own trot rhythm making the gait slightly less regular especially on the voltes. Michel probably rode the nicest differentiation between the medium and extended walk, which was ground covering in wonderfully 4-beat. An unscripted flying change in the counter canter pushed the score for submission down. Swing de Hus is certainly light in the bridle, but the contact was not steady enough. He was not enough pushing from behind towards the contact.  The judges scored the ride with 8.6 for trot, 9.0 for walk, 8.5 for canter, 7.8 for submission and 8.5 for general impression. 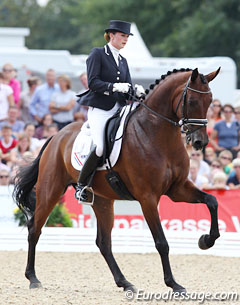 Emmelie Scholtens and Annabelle Collins' Dutch warmblood gelding Borencio (by Florencio x Lord Sinclair I) made a strong recovery from a mediocre preliminary test. Though the horse still opened his mouth regularly and showed his teeth, the contact was smoother and more quiet. The long legged bay showed regular, smooth trot work but he paddles extremely with both front legs and his gait is so incredibly round that he appears more like a harness horse than a dressage horse. He blocked in the walk pirouette, but his medium and extended walk were extremely ground covering but slow in the rhythm. In canter the bay takes huge strides but there was balanceloss in the counter canter and the walk in the simple changes lacked impulsion. The horse received 8.3 for trot, 9.0 for walk, 8.0 for canter and submission and 8.7 for veneral impression, which brought them to a generous 8.4 total score.