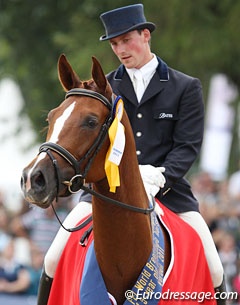 Lynne Crowden's chestnut mare by Furst Heinrich x Dimaggio enchanted the crowds and judges with her extraordinary gaits and magical rideability. As last to go in a field of 15 horses everyone knew what the mare was up for but after Thursday's mind-blowing ride in the preliminary test, there was no doubt about it that Farouche was the best of best. The only thing that was between her and title was one more flawless test.

Eilberg must have felt much pressure on his shoulder as he rode slightly more conservatively in the trot. The lightfooted, engaged and elastic mare was working with her rider and she bent nicely on the serpentine but could have pushed from behind with a little bit more power. The medium trot was delightful but in the extended she broke into canter. The walk was absolutely to die for.: fantastic rhythm and ground cover and she stayed clean in the 4-beat even in the collection before the strike off to canter. The canter was uphill and well carried, even in the counter canter, though there was some hesitation and tension in the final stretch of left counter canter right before the end of the ride. When Michael gave and took the reins in the trot, the mare stretched her neck contently in full relaxation. As soon as the second halt and salute also went perfect, Eilberg sighed in relief while the crowds went nuts with their clapping and cheering. 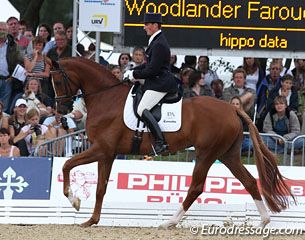 The 5-year old finals were judged by Jennie Loriston-Clarke (GBR), Wojciech Markowski (POL), Mariano Santos Redondo (ESP) and Mariette Sanders-van Gansenwinkel (NED). They gave the British duo amazing marks with 9.4 for trot, 10 for walk, 9.8 for canter, 9.6 for submission and 9.8 for general impresion. With a total of 9.72 Farouche almost achieved the world record score of 9.8 which is still standing in Florencio's name (followed by an 9.78 by Don Davidoff).

The judges were lyric in their commentary on the mare. They especially praised the mare's trot because it was "lightfooted, uphill, nice in the self-carriage with an outstanding medium trot" and there was hardly anything better than her walk, which earned her a 10. The mare's amazing "willingness to work" stimulated them to give a 9.8 for submission. 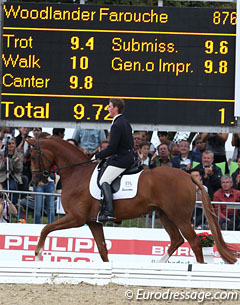 Eilberg, who first started out in show jumping and eventing but switched to dressage four years ago, was speechless with winning the title, the third time by a Brit (Suzanne Davies first, then Susan Pape-Draper with Cayenne). "It's amazing. We always know the horse was very talented, but to come here and do the two tests she's done, it's amazing," he explained.

Farouche's breeder Lynne Crowden and her husband Dave were beaming with joy about this core-shaking achievement. "I thought Thursday was bad, but today's is much worse," Lynne quipped. "The horse just makes you breathless with admiration for her. She's a complete person, she's her own person. We're very proud. This guy (patting Michael on the shoulder) did a fantastic job."

Michael is trained by his father Ferdi and they run a family business. Eilberg initially jumped up to Young Riders level, but "dressage was always going on at home," he explained. "I was always getting into an argument with him between jumps in the arena." The switch to dressage came about because there were "just better horses in dressage than show jumping at home." 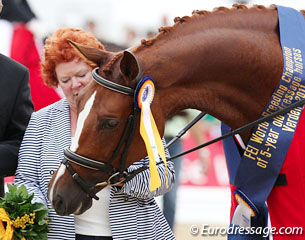 Lynne has used Farouche's gene pool for breeding before through embryotransfer. They have a yearling named Walk on the Wild Side on the ground by the eventing stallion Wesuvio (by Walentino x Sao Paulo) . "The yearling looks exactly like her mother," Lynne attested. This year they had ET done using semen by their own licensed stallion Woodlander Wavavoom (by Weltregent x Longchamp). "Our priority has been the training," Crowden explained. "Everything had to be easy and available. After this competition, will do another embryotransfer, but for next year we haven't decided yet. We don't like the mare to go away for breeding, so we must work with chilled semen. it has to be right. Something not to make her worst."

Farouche is owned by the Crowden, the Eilberg family and Alison Walton (an old friend of Lynne). The Eilbergs and Woodlander stud have been working together for the past five years. "It's a successful match," Eilberg admitted. "For a breeder it's difficult to know what you bred if you don't have great training and riding," Lynne added.

Girl Power All the Way in 5-year old Division 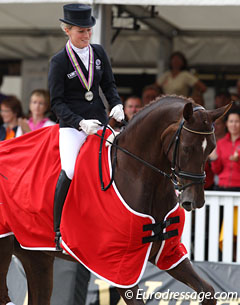 It was mare power all the way in the 5-year old division as two chestnut ladies reigned supreme by finishing first and second and leaving six stallions and two geldings behind them. Furthermore the gap between the two ladies and the best of the rest was humongous because they both stood out with their lightness in the bridle and exceptional rideabiity while their male peers were stronger in the contact or more distracted by the surroundings.

Six years ago Helen Langehanenberg became 5-year old world champion with Damon Hill (by Donnerhall x Rubinstein), today she won silver aboard his daughter Damon's Divene (by Damon Hill x Rubin Royal). Bred and owned by Christian Becks, Damon's Divene executed a very harmonious, smooth and flowing test. She could have been slightly more uphill in the trot and a little more engaged from behind. The walk was outstanding and in canter the mare was active and working with her rider. Langehanenberg took all the time to develop a good walk in the simple changes but there could have been more impulsion. In the left counter canter there was a slight loss of balance but these were only the few minor issues in the beautiful, relaxed ride. The final give and take of the reins in trot was the highlight. Damon's Divene did not lose the rhythm and comfortably stretched her neck. 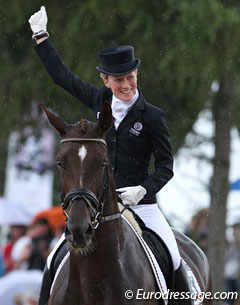 The huge liver chestnut mare scored 9.2 for trot, 9.3 for walk, 8.9 for canter, 9.0 for submission and 9.2 for general impression. With a total of 9.12 the silver was theirs. The judges praised the trot for its harmony, elasticity and cadence. They said that the "elegant mare" was "nice in the contact" but that she could develop "more self-carriage in canter."

Langehanenberg had a huge smile on her face at the press conference and was asked to compare father and daughter. "I think there are many similarities. Damon Hill is not the biggest horse but he grows in the arena. Damon's Divene is huge, but she has a smooth way of moving through the body with really good hindlegs. Every transition is through the body. I really love her, but I love her father too."

Langehanenberg will not ride the Bundeschampionate with her mare. "She has done a brilliant job the whole year," Helen explained. " If she did a good job here, the
season would be over for her. I think it's fair to give her a break now. She will now get a little rest, than I try working her to M-level and hopefully come back next year and achieve maybe the same." 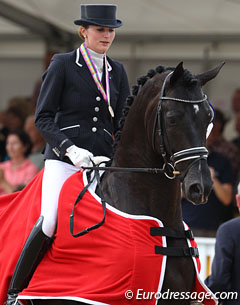 If you were to believe the hype that was raging in Holland, Bretton Woods would be the World Champion with 11.0 points this year. The drop dead gorgeous black stallion by Johnson x De Niro x Romancier was the one to watch, but Farouche in fact caught that spotlight and became the absolute talk of the town, leaving Bretton Woods in the dark.

Emmelie Scholtens and the 1.78m standing black stallion are a wonderful pair and the horse is certainly promising for the future but their finals' test still had several issues. The black has a beautiful, high set neck, gorgeous face and lovely knee action. His hindlegs are active and quick, but they are not stepping under enough, nor taking up the weight. The horse was often crooked in the body. The medium trot was not on one line, the halt was crooked and he slightly hollowed the back at the end of the extended trot. In walk the horse had two hooves overstep, but in the walk pirouette he blocked. The canter is uphill and very scopey but in counter canter the horse lost his elasticity and self-carriage. He dropped out of canter on the short side and the counter canter left, Scholtens was pulling the head from left to ride to keep him through. The walk in the simple changes could have been more expressive and when Emmelie gave and took the reins at the end of the test, Bretton Woods trot turned into something very normal. 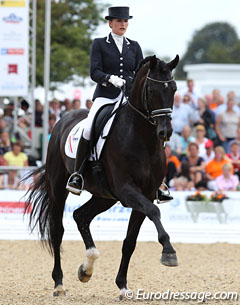 The judges apparently saw something different, because to them the horse always put the hindlegs "nicely under the center of gravity". They were totally right when they said that the trot was "very active, with lift in the forehand" but the "nice smooth contact" could in reality have been much smoother. Of course it's not simple for a young female rider to master such a gigantic stallion. The panel certainly hit the nail on the head to call Bretton Woods a "top class dressage horse" but they neglected to mention many of the submission issues that were to be seen in the test today. Nevertheless, the delightful stallion earned 9.0 for trot, 8.2 for walk, 9.4 for canter, 8.8 for submission (!?) and 9.0 for general impression. This averaged out into 8.88 and the bronze.

The very sympathic Scholtens was quite reserved with her commentary at the press conference. With the rumour mill turning at high speed she indirectly confirmed that Bretton Woods will not be returning to The Netherlands tomorrow but has found a new home at Paul Schockemohle's stallion station in Muhlen as he has moved in the German ownership (Schockemohle/Linsenhoff). By mentioning that plans were never made to attend the Pavo Cup Finals next week ("We didn't plan the Pavo cup yet because all of that has been going on"), she inadvertently confirmed what was already more than obvious. Only an hour later, the official notice was published that Ann Kathrin Linsenhoff, in partnership with Schockemohle, had indeed acquired the stallion.

The quality in this year's 5-year old finals was amazing and the judges gave rave review on the medal winning horses. British Jennie Loriston-Clarke, who was the president of the ground jury and has been limping on crutches since she broke her ankle at the show by falling off some steps on Thursday, praised the harmony of the performances and the excellent form of the winners on this day. 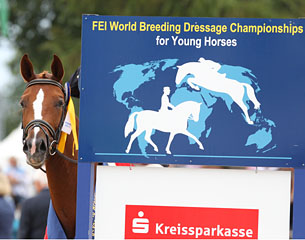 "There were so many lovely horses who were not winning because they didn't have such a good day," Loriston-Clarke explained. "Farouche has come through all the time. Damon's Divene has been so consistent, Bretton Woods came up better today, more relaxed and he showed the paces better. The tension sometimes comes through with the atmosphere."

Loriston-Clarke revealed that the judges had some heated conversations in deciding upon the marks. "We were having so many arguments about the trot mark for Farouche. The quality was so lovely. Her self-carriage and lightness to the bit was so nice. I wish I was 50 years younger and could ride such quality."

One of the most interesting aspects of this year's competition isthat the breeding of the 5-year old finalists is heavily based on sires who were former World Young Horse Championship medallists. Furst Heinrich, Damon Hill, Florencio, and French Kiss were all world champions themselves and they sired five horses in the top eleven. Sires Painted Black and San Remo were medalists themselves and sire Daddy Cool is by world champion Don Davidoff. The one remaining sire in the top 10 is Florestan, who is too old a stallion to have ever been considered for the World Young Horse Championships (which were established in 1999).

(Tomorrow, another article and tons of extra photo's on the other finalists)