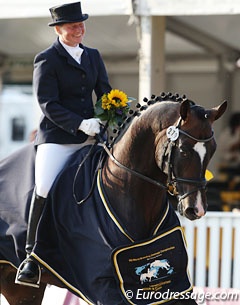 With the judging panel slightly changed as Gardner was added to the line-up together with Loriston-Clarke, Van Daele and Fromming, the scale of scores in the consolation finals was completely different from the 5-year old preliminary test. De Champ, who was only good for 7.9 in the first round, made a huge climb in points when he received 9.0 for walk, trot and submission, 9.5 for canter and 9.2 for general impression.

Engelbart had a wonderful ride on the typey Daddy Cool x Caprimond offspring. Beautiful, elegant and lightfooted trot work was followed by super walk in which the horse stretched the neck and took big strides. In canter he was nicely uphill but he tilted slightly with the head in the left extension. The contact with the bit was soft and De Champ stayed well at the vertical. It was a neat ride but overall the stallion lacks power from behind. 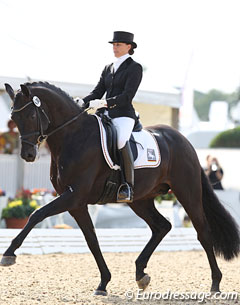 Schockemohle's Oldenburg licensing champion Furstenball, which he co-owns with the stallion's discoverer Lone Boegh Henriksen, finished in second place. Under Ines Westendarp the gorgeous dark bay Furst Heinrich x Donnerhall son lacked energy and steam in the preliminary test but he appeared as a new born horse in the consolation finals: fresh and energetic, Furstenball was very expressive and balanced in the trot. He has an enormous walk in which he takes slow, ground covering strides with a very clear rhythm. The canter was uphill and well balanced, but the horse could have been a bit more closed in the frame, especially on the right lead. Whereas the horse dropped below the vertical in the first round, he now stayed nicely uphill in the frame.

Furstenball was praised by judge Fromming for his "very elegant, light and uphill" trot, the "good spring" in canter and the "consistent contact". He received 9.5 for trot, 8.2 for walk, 9.3 for canter, 8.9 for submission and 9.0 for general impression. While De Champ executed a more meticulous test, Furstenball was the better quality horse.

Geert Jan Raateland and Tim Coomans' Dutch warmblood mare Beau Deux (by Ravel x Gouverneur) finished in a surprising third place with 8.04 points and qualified for the Finals tomorrow together with De Champ and Furstenball. 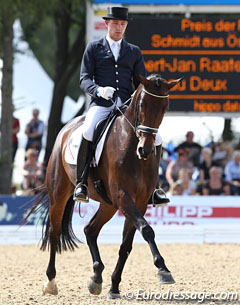 The big bay mare was much better than yesterday with a smoother, more regular rhythm and a fault-free execution of the movements. The trot was rhythmical but lacked expression and real bounce off the ground. The walk was nice with good overtrack but the four-beat could have been clearer. The canter was good. The mare has three nice basic gaits, but just doesn't leave a lasting impression and she was often crooked in the body or tilting the head to the right. She also ground her teeth in walk. The mare leaned too much on the bit to appear a light expressive mover. Nevertheless, she scored 8.2 for trot, 8 for walk, 7.8 for canter and submission and 8.4 for general impression.

Two mares tied in fourth place: Guillaume Recoing's Donna Primera and Cindy van Vugt's Brooklyn. Recoing and Marina Caplain Sainte Andre's Oldenburg mare (by Don Primero x Ex Libris) scored 8.02 and stayed 0.02 points short of a third place. The sympathetic bay mare has very nice gaits but was too dependent on the bit the entire ride. Cindy van Vugt's Brooklyn (by United x Havidoff) was much better in the contact which enabled her to move with more lightness and shine. There were still small issues like a mistake in the rhythm in the extended trot and the nose often came behind the vertical.