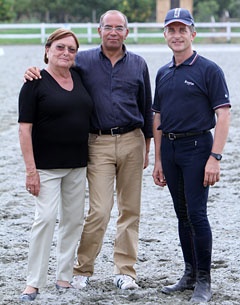 Two days rich of enthusiasm during a full immersion on “textbook in practice” was offered to a handful of Italian riders and judges at a seminar, hosted by Gruppo Italiano Dressage, in Caselle, Italy on 30 - 31 July 2011. Judges Mariette Withages and Hamoud Fouad were keynote speakers.

Thankful to the hard work of Gruppo Italiano Dressage secretary Paolo Peron and the hospitality of Canteri's Sporting Club Paradiso, 16 Italian riders of various levels from novice to Grand prix had the opportunity to meet one of the most renowned judges in the world: Mrs Mariette Withages. She was assisted by Italian Hamoud Fouad, a 3-star judge and trainer.

The event has been conducted like the FEI Dressage Challenge: the morning of the first day all participants rode their test and were judged like at a competiton and filmed. After a light lunch the video footage was reviewed and commented on. A discussion between judge and rider followed, but Mrs Withages also took every opportunity to use the good and bad of each presentation to explain and clarify the correct way of executing movements.

At the end Mrs Withages, not at all tired by our mistakes and by such a long day, picked from her bag a CD with a presentation that is the foundation of the system of judging an training: the correlation beween the Scale of Training and the collective marks . But the first day didn’t end with this presentation. After the formal thanks between organizers, teachers and riders, Mrs Withages was offered a souvenir for this Italian seminar. She received a Gruppo Italiano Dessage Pen, which she sympatically show us as her “pen of the 11”. Dinner and dancing followed.

The second day, a hot summer sunday, started at 9 o’clock with half hour lessons for each competitor. Each one came home with a lot of homework for the future. Withages immediately identified the major problems of each combination and explained how to fix it. By fixing the bigger issue the minor mistakes automatically get solved by it as well.

The Italians appreciated the extreme professionality of Mariette training the first rider of the day and the last (after more than 8 ours standing, walking and shouting under the shining sun at 30° ) with the same energy and passion. Her willingness to teach riders  at every level was greatly appreciated. There was no difference between training professional riders with problems in piaffe and a medium rider with position issues.

The guidance of Mr Hamoud, President of Gruppo Italiano Dressage, was very important for the creation of a friendly atmosphere. He took care of the training of some rider and supported the hard work of Prof. Lucia Lippi for the translation. All participants ended with the desire to have more opportunities to be helped and inspired. They were moved by the contagious enthusiasm of this little iron Lady. Under the guidance of Mr Hamoud and the work of Peron Gruppo Italiano Dressage becomes more and more a reference and guide for Italian dressage riders. 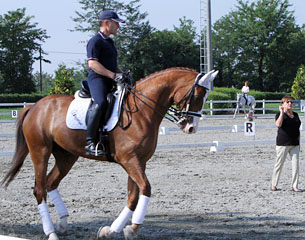 At the assessing of the tests Saturday afternoon some of the more frequent problems that Mrs Withages exposed were position of the rider (often too much leaning backwards with weight on buttocks), hands too hard and too conservative riding on extensions, but a problem that affected all the riders was the shoulder-in.

In effect, large parte of the discussion and the subsequent work with horses, has been about the correctly ridden shoulder-in which in most cases was too similar to a leg yielding. With the help of her body language Withagfes refreshed the participants of the correct shoulder-in as is described in the rule book, with bending of the ribcage, the rear feet pointing toward the direction of movement (i.e. maintaining the original direction parallel to the track) and the front feet leaving the track. The space between your horse and the track must not be a “corner of a cake”, she said, infact only the fore half of the horse must form the angle.

To obtain this result you must prepare the horse already before the corner, with half halts and riding well into the corner itself. The most useful exercise is, for Mrs Withage, very classical: rinding a volte into the corner, maintaining the rhythm and activity, doing half halt every quarter of the volte, releasing the inside rein and than proceed along the track for the shoulder in with a lot of half halts with the outside rein and a very active inside leg a little behind the girth. Her advice is to put the inside leg flat on the point of the rib cage that the rider feel the horse more “large”. This position is a little different from the leg position that is described on the books (inside leg at the girth). Some of the riders noted that sometimes they ride a little too much angle in the shoulder-in because they very frequenty received comments of the judges: “too little angle”, not enought, not shown.

Another problem which appeared was the overuse of the inside hand expecially the left one. According to Mrs Withages, the majority of horses is born like an  “inverted S”, whith a neck more concave to the left and a ribcage, on the opposite, convex on this side. This leads to a horse with too much flexion and to less bend for example during the left shoulder-in and left halfpass. The remedy, according to Mariette, is absolutely have a very light left hand a very active left leg.

Some horses showed problems in rhythm in the walk, mostly in the walk pirouettes. The problem is difficult to solve, but her advice is to come back to the beginning: position of the rider light on the back in order not to block the natural movement, stretch and lowering of the neck, tempo a little more forward, and supporting the horse with one calf at a time in the rhythm of the walk. On Sunday we saw a Grand Prix horse well known for its tendency to pace showing off a correct walk with an overtrack never seen before. 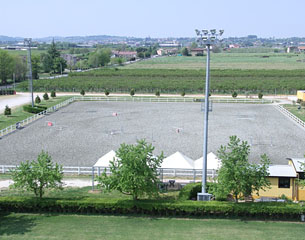 In their 30-minute training sessions each rider worked on their biggest problem, but each session started with some guidlines for a better seat. Withages stressed the need for more elasticity in the wrist, elbow, and shoulder. In fact, Mariette explained again the reason why hands must be held as written in the rulebook, the fist with the thumb high and fingers closed, with nails visible for the rider's eye. This is the correct position to have the reins always of the right lenght and to follow the mouth with the arm. “Lightness is not a hand opened, but a arm with elastic joints” she stressed.

The Centro Ippico Paradiso Horse & Pony is a facilty owned by the Canteri family. Father Giustino is the boss, his son and daughters and their husbands work in a team as trainers, secretary of the club, show director, show secretary, and they manage the club house with italian bar. Their facility is becoming one of the most interesting show places in eastern Italy. In fact, there is a very large indoor arena n° 2 covered arena (35x65 e 15x15) and one very big arena with also a restaurant under construction, a show arena with grass (80 x100) and two sand arena (80x 100 e 60x80). The sand arena have a underground system to maintain the desired level of humidity for the footing, keeping it perfect in any weather condition. It can  have different levels of softness as requested by the competition. Centro Ippico Paradiso organizes many shows, more often jumping but also dressage (incl. the CDI Caselle di Sommacampagna), western, driving, and vaulting as well as agility dog races and sometimes dancing evenings inside the large Circus Tent that is always mounted on site.
The Centro Ippico is near the Sommacampagna highway exit, between Verona and lake Garda. A lovely starting place for visiting the Veneto area.